Letters and Journals (but mostly letters)

My current obsession: the letters and journals of famous authors.

I've spent the better part of this past year plunging in and out of the most intimate and personal moments of some of my favorite writers. It's been an unexpected joy. And as someone who keeps her own journal, it is both inspiring and hopelessly demoralizing. Reading the private musings of an 18-year-old Sylvia Plath is a sure-fire way to really deflate one's literary ambitions.

And while it's certainly exciting to read about the monumental moments in these authors' lives relayed to their loved ones, it is the ease and grace with which they recount the ordinary details of their daily lives that is the true beauty of these collections.

Here is what David Sedaris has to say about the importance of keeping a journal:


I’ve been keeping a diary for thirty-three years and write in it every morning. Most of it’s just whining, but every so often there’ll be something I can use later: a joke, a description, a quote. It’s an invaluable aid when it comes to winning arguments. "That’s not what you said on February 3, 1996," I’ll say to someone.

For more on what other famous authors say about keeping a journal, click here. 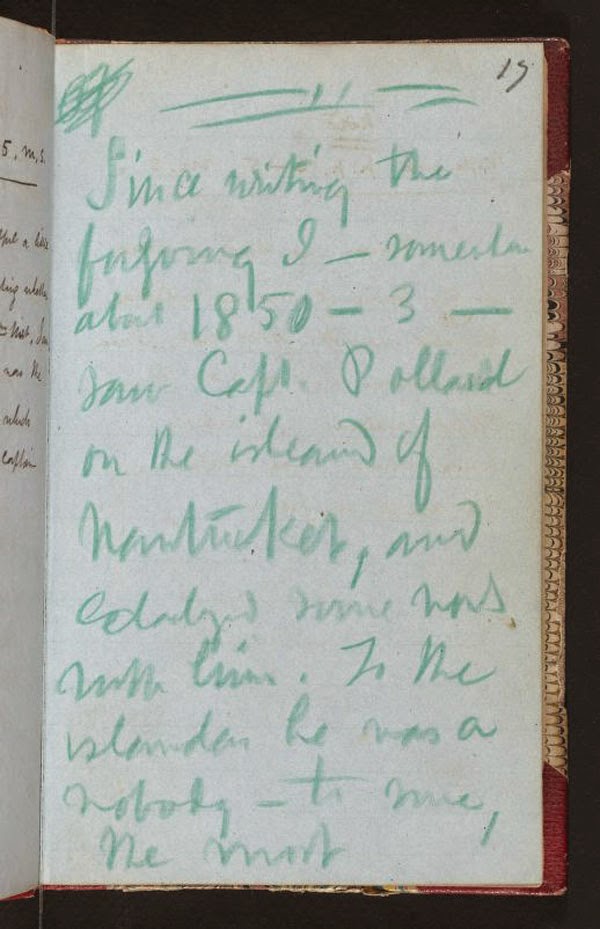 Plus, check out this picture of Herman Melville's journal. There are a bunch of other great images of author and artist journals here.

And here are the four collections that I am currently enraptured with: Letters of Note : An Eclectic Collection of Correspondence Deserving of a Wider Audience by Shaun Usher

This spectacular collection of more than 125 letters offers a never-before-seen glimpse of the events and people of history—the brightest and best, the most notorious, and the endearingly everyday. Entries include a transcript of the letter; a short contextual introduction; and, in 100 cases, a captivating facsimile of the letter itself. The artfulness of Shaun Usher's eclectic arrangement creates a reading experience rich in discovery. Mordant, hilarious, poignant, enlightening—surprise rewards each turn of the page. Colorfully illustrated with photographs, portraits, and relevant artworks, this handsome hardcover is a visual treat too, making Letters of Note an utterly distinctive gift, and an instant classic. The Unabridged Journals of Sylvia Plath

A major literary event--the complete, uncensored journals of Sylvia Plath, published in their entirety for the first time. Sylvia Plath's journals were originally published in 1982 in a heavily abridged version authorized by Plath's husband, Ted Hughes.

This new edition is an exact and complete transcription of the diaries Plath kept during the last twelve years of her life. Sixty percent of the book is material that has never before been made public, more fully revealing the intensity of the poet's personal and literary struggles, and providing fresh insight into both her frequent desperation and the bravery with which she faced down her demons. The complete Journals of Sylvia Plath is essential reading for all who have been moved and fascinated by Plath's life and work. “I’ll croak before I write ads or sell bonds—or do anything except write.”

James Agee’s father died when he was just six years old, a loss immortalized in his Pulitzer Prize–winning novel, A Death in the Family. Three years later, Agee’s mother moved the mourning family from Knoxville, Tennessee, to the campus of St. Andrew’s, an Episcopal boarding school near Sewanee.

There, Agee met Father James Harold Flye, who would become his history teacher. Though Agee was just ten, the two struck up an unlikely and enduring friendship, traveling Europe by bicycle and exchanging letters for thirty years, from Agee’s admission to Exeter Academy to his death at forty-five. The intimate letters, collected by Father Flye after Agee’s death, form the most intimate portrait of Agee available, a starkly revealing account of the internal and external life of a tortured twentieth-century genius. Agee candidly shares his struggles with depression, professional failure, and a tumultuous personal life that included three wives and four children.

First published in 1962, Letters of James Agee to Father Flye followed the rediscovery of Agee’s Let Us Now Praise Famous Men and the posthumous publication of A Death in the Family, which won the 1958 Pulitzer Prize and became a hit Broadway play and film. The collection sold prolifically throughout the 1960s and ’70s in mass-market editions as a new generation of readers discovered the deep talents of the writer Dwight Macdonald called “the most broadly gifted writer of our American generation.” The Selected Letters of Willa Cather

We have a few paleo-ers here at the bookstore. But I don't know anyone who has quite the handle on all the cookbooks that Emily M. has. Here are her picks and a few reviews to help you wade through them all:

Paleo, Paleo, Everywhere There is Paleo! For some the paleo diet is an annoying or a passing fad. For others, it is crucial for everyday living. If you are one who utilizes paleo -- or need a gift for someone who is -- our shelves are overflowing with paleo!

While I am not strictly paleo, I often use the books since they are close to the diet that is essential for me. Here are my recommends: Against All Grain by Danielle Walker

This is the cookbook I use nearly every week. She has a great balance of breakfasts, drinks, chilis and soups, to snacks, and breads. The most used recipes for me are Banana Bread (always very moist), Maple Sausage with Cinnamon Apples (the kitchen smells so amazing with this), and Slow-Cooker Beef Chili (throw it in the crock pot and come home to an amazing warm dinner). Her recipes are approachable and easy to follow. Against All Grain: Meals Made Simple by Danielle Walker

Quite different from her first, the meals are made simple because there is some prep ahead of time -- like the pancake mix used in a lot of breads or make ahead sauces and such. If you are the creative cook though, beware, as some have considered Meals Made Simple as a book of ideas and very simple meals. However, for some simple food prep and meal plans are what they need! Nom Nom is definitely for the busy cook. I am always impressed how so few ingredients can make amazing things in so little time -- particularly the Strawberry Banana Ice Cream, 4 ingredients plus 2 minutes of your time. The comic style approach and multiple photographs will help guide uncertain ones. I really liked how this cookbook explained the ups and downs of bringing paleo into a family lifestyle. I have never seen so many varieties of ice cream -- without refined sugar and dairy -- in one place! Also, I haven't had much trouble with it staying soft (as opposed to rock hard -- which is the hardest trial with homemade ice cream). I've successfully tried a lot of basic flavors, matcha, cider ice cream...next up is the gingerbread ice cream! Another perk is the variety of popsicles and side compliments: cookie bowls, spreads, sauces, brownies...) When these author-chefs came into the store for an event a while back, the place was packed! And now I can see why. Paleo Kitchen is another frequented cookbook for me. Like Danielle Walker's books, the recipes are approachable and easy to follow. The stunning photography of eats, like Pan-Seared Rosemary Sage Pork Chops with Apples and Pears, made the book look enticing -- the taste and smell was even more enticing in real life! Make Ahead Paleo by Tammy Credicott

Definitely great for people who like to spend a day prepping and then cooking the actual meal later in the week. Whether you freeze the recipes ahead of time, have to travel a lot and be on the go, or cook them up right away, Make Ahead has a large palette of foods. From Fajita Burgers to Kitchen Sink Cookies to White Chicken Chili, it's all good. While this is NOT a paleo book, it may help some people (esp. those who loosely follow paleo) as the food is basic, simple, wholesome, and tasty! And, if you follow her blog, it's so great to have her beautiful pictures and recipes all together. I fell in love with the Grilled Cheese with Apples and Bacon and went from there.

We have so many fabulous paleo cookbooks (and other awesome cookbooks of all kinds) in stock. Come on by!
at 1:30 PM No comments: