Where Star Wars and Books Collide

Why is there such a pervasive Star Wars/Book Culture?  Is it just that Star Wars creeps into simply everything, or is there more to it?  Are books and Star Wars just the ideal nerd cross over?  It must be.  Because the rash of Star Wars/Book collisions is far too frequent to be coincidental.  Here are a few of my recent sightings. 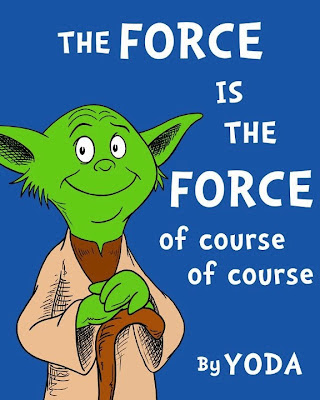 ***
TPB bookseller Annie has an awesome blog that she co-writes with her friend.  The idea behind the blog is to re-read all those Star Wars Universe sequels and prequels and all kinds of quels, and then record their adventures.  Her is more in Annie's own words...

"A long time ago, in a galaxy far, far away...." These words still give me tingles for so many reasons, both personal and nerdy. I saw the Star Wars movies for the first time as a young girl and fell instantly in love with the characters, the universe, and the story. So much so, that when I met my dear friend Tess in elementary school and discovered she also adored Star Wars, we found a unique common ground.

Little did we know that bonding over the Force, Banthas, lightsabers, secret twin siblings, the Millennium Falcon, and nerdy books would lead us into a friendship spanning more than half our lifetimes. The Star Wars game we played in the woods at Tess's house and in my backyard ensured game nights at college, care packages when Tess moved to South Korea to teach English and when I went through chemotherapy, and many, many movie marathons when we saw each other in person.

Star Wars didn't really create our friendship, of course; we did that ourselves. It just greased the s-foils a bit, if you will - helped us learn to embrace our differences because when the trenches of life came our way, it was "trusting our feelings," as Obi-wan would say, that helped sustain us and that continues on today. So this reading project and blog - which I'm sure to many non-Nerf Herders sounds completely silly - is just another way we celebrate friendship. After all, the Force is what bids us together and all that...

***
And of course, all the awesome books being released recently.  Here is a very small list... The Secret of the Fortune Wookiee, by Tom Angleberger And maybe, just maybe, I myself will pick up my first Star Wars Novel in many moons when this one comes out in December..come on, it's Han Solo-he was my first love, and you never forget your first love. Lolbooks, or Books on the Interwebs 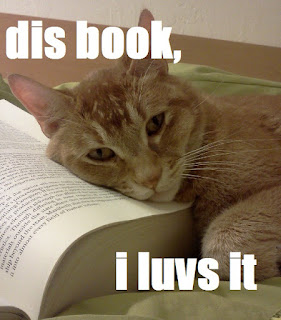 Hello, my faithful readers.  I've done a little editing of our Favorite Book Sites, tabby thing.  Yes, that's a technical term.  Anyhow, it's to the right of this very post you are reading, and features...can you imagine... our favorite book sites!  I've included some great. local, indie bookstores, as well as equally great, out-of-state indies.  There are also links to hilarious and beautiful, book-related blogs.  Of course, there's the usual big name book review sites, for your easy access.  And more recent additions include, book-related blogs from some of our current and former, fabulous booksellers.  Take a look, and comment here if you have a favorite book site that I don't know about!
at 1:18 PM No comments:

Labels: Books on the Web
Email ThisBlogThis!Share to TwitterShare to FacebookShare to Pinterest 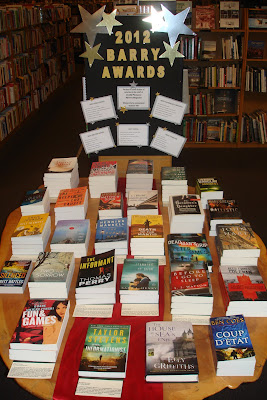 The tree table this month is featuring nominees for the Barry Awards.  The Barrys are an award put on by the magazine Deadly Pleasures, honoring the best in mystery writing. From their website:

In 1997, the editorial staff of Deadly Pleasures decided that since one of the magazine's stated goals was to search out and report on the best works being published in the field of crime fiction each year, it would be a natural fit to present awards for excellence. Then came the dilemma of what to name the award. At the time all associated with the magazine were still reeling from the untimely death of Barry Gardner, who was arguably the best fan reviewer on the planet, so it was decided to name the award after him so as to keep his memory alive.

Not a bad way to honor someone.  Here are some of Deborah's and Joyce's favorites for the Barrys:

The Keeper of Lost Causes, by Jussi Alder-Olsen

Carl Mørck used to be one of Copenhagen’s best homicide detectives. Then a hail of bullets destroyed the lives of two fellow cops, and Carl—who didn’t draw his weapon—blames himself. So a promotion is the last thing he expects. But Department Q is a department of one, and Carl’s got only a stack of Copenhagen’s coldest cases for company. His colleagues snicker, but Carl may have the last laugh, because one file keeps nagging at him: a liberal politician vanished five years earlier and is presumed dead. But she isn’t dead … yet. Darkly humorous, propulsive, and atmospheric, The Keeper of Lost Causes introduces American readers to the mega-bestselling series fast becoming an international sensation.

Turn of Mind, by Alice LaPlante

Dr. Jennifer White, a retired hand surgeon, writes daily in her journal. "My bible of consciousness" she calls it. White is in the throes of dementia and the unlikely narrator of LaPlante's brilliant debut novel. Amanda, Jennifer's long time best friend and neighbor, has been found dead and now the police want to question Jennifer. Someone possessing a surgeon's skill amputated four fingers from one of Amanda's hands. Detectives strongly suspect Jennifer but who can penetrate the thickening fog that paralyzes her brain? Out of this situation LaPlante not only weaves an engrossing mystery, but also explores the dark complexities of friendship and motherhood. "Turn of Mind" is one of the best books I've read this year!  -Joyce

Our smaller theme table is dedicated to the arrival of the 2013 calendars!!!  Yep, it's that time again!  It flies, doesn't it? 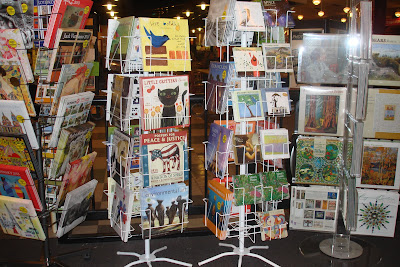 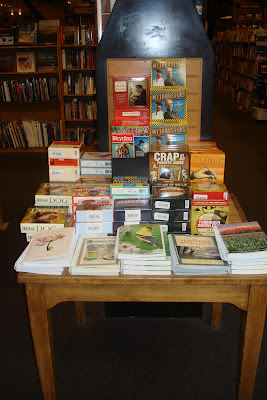 A friend sent me this article, which then led me to this cool blog.  Am I the last person to come across this?  Well if I am, I blame you all for not telling me about it.  This fits right in with my public-transit-reader voyeurism.  This blog is filled with submitted pictures of readers' bookshelves.  I love it.  One of my favorite things about seeing bookshelves in movies or magazines, is searching for familiar or favorite titles.  Now I can search to my heart's content.  With the added bonus that these shelves are real and represent real people; filled not only with the books people love, but also the knick knacks and photos that find their homes along with those well-loved books.  Enjoy.