The Snow Child by Eowyn Ivey

I waited for months to get my hands on a copy of this book, and finally couldn't stand the wait any longer, so I splurged on the the hardcover when I was in San Francisco and visiting City Lights Bookstore. Both the wait and the splurge were worth it.

The Snow Child follows the lives of Mabel and Jack as they try to make a life for themselves in the wilds of Alaska. It's 1920 and homesteading is a harsh and lonely life. Mourning the child they always wanted but never had, Jack and Mabel exist in a distant marriage until one magical night they build a child out of snow. From this moment on, their lives are never the same.

Eowyn Ivey's words bring the wilderness to life, with intoxicating sights and smells that leave you dizzy with the need to be outside, to breath the fresh air. This novel sparkles like the ice and snow that swirl through its pages.  It is a love story and a story of survival, a story of belonging and a story of letting go. But at its heart this is really a story about holding ourselves together when the forces that threaten to tear us asunder aren't only found in the dangers of a wild and uncharted territory, but also in the depths of our hearts.

So many moms and kids have been in the bookstore this weekend; people buying cards, little gifts, and trying to find that perfect book for mom.  One woman came in with her new baby, celebrating her first Mother's Day.  Another bought the book that she loved most as a child for her mother to read to her new granddaughter. My mom says her favorite book to read to my brother and I was The Monster at the End of this Book.  It is a pretty great read, and I highly recommend it if it wasn't a part of your childhood.  And while I have fond memories of reading with my mom, it's as I get older that I truly enjoy sharing with her a passion for reading.

Mostly, I love sharing our different reading tastes.  I like to read fiction and love passing on the most interesting and quirky novels to my mom.  She doesn't always like them as much as I do, but she always reads them and points out some new aspect that I had missed.  But it does make me feel so awesome when she loves my recommendations like I do; gives my daughter/bookseller soul a boost of pride. Right now my mom is really into history.  Specifically, the presidents. She's been making her way through presidential biographies for the past few years.  She's currently finishing  up John Quincy Adams, which she says has been the most boring...but she pushes on.  Her favorite thus far is George Washington.  And the horrible things she told me about Thomas Jefferson caused me to throw away the souvenir Jefferson bust I had gotten at the Jefferson memorial.  And this summer she starts Andrew Jackson.  She'll be reading American Lion, and I think I might shun my history/nonfiction aversion and read it with her.  It's the least I can do for the woman who gave me and continues to foster my love of reading.  Thanks, Mom!

Wild Things...you made our hearts sing.  Seems many people have been ruminating on the passing of Maurice Sendak.  Here are some of the great tributes that have come my way. 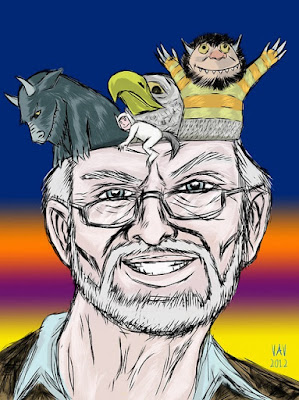 Here is one by our very own Vlad. Vlad cooks the books over at the book oven, aka the Espresso Book Machine, aka Ginger. He's also an awesomely talented illustrator, and this week he put pen and heart to paper for this lovely tribute. 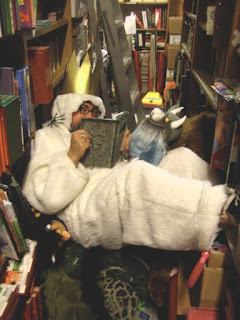 And here's the man himself, making a pretty convincing and mischievous Max, King of the Wild Things. 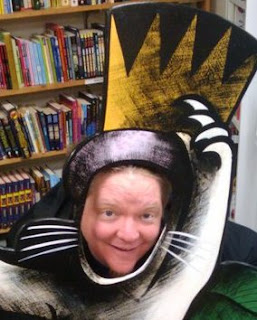 Here's Steve as another would-be Max.  This great Max cut-out lives at Orca Books in Olympia.

And last but not least, another great tribute illustration from Third Place customer, Rob Christianson.

Beautiful tributes for a beautiful man. Great work, guys!
at 12:26 PM No comments:

Labels: Book News, Books on the Web
Email ThisBlogThis!Share to TwitterShare to FacebookShare to Pinterest Beloved children's book author, Maurice Sendak, passed away today. His classic, Where the Wild Things Are has inspired countless children's adventures, a novel, and even a feature-length movie.  He has written and illustrated numerous other books, and won several literary awards.  We have all been Max, or his mother, or his beastly friends at one time or another.  And I'm sure Maurice will be sorely missed by young and old today.

In a strange twist, I am a Pole (And So Can You) was released today.

It's new release Tuesday!  One of the best perks of being an independent bookseller has got to be the ARCs.  That's bookstore lingo for Advanced Reader's Copy.  Which means we get to read new books before they are released and then tell you, the discriminating book buyer, all about the awesome new reads coming out.  This week we've got three great suggestions. A ferocious firefight with Iraqi insurgents at "the battle of Al-Ansakar Canal" has transformed the eight surviving men of Bravo Squad into America's most sought-after heroes. For the past two weeks, the Bush administration has sent them on a media-intensive nationwide "Victory Tour" to reinvigorate public support for the war. Now, on this chilly and rainy Thanksgiving, the Bravos are guests the Dallas Cowboys, slated to be part of the halftime show.

Among the Bravos is the Silver Star-winning hero of Al-Ansakar Canal, Specialist William Lynn, a nineteen-year-old Texas native. Amid clamoring patriots sporting flag pins on their lapels and Support Our Troops bumper stickers on their cars, the Bravos are thrust into the company of the Cowboys' hard-nosed owner, his coterie of wealthy colleagues, a luscious born-again cheerleader, a veteran Hollywood producer, and supersized pro players eager for a vicarious taste of war.

Among these faces Billy sees those of his sister, father, and Shroom, the philosophical sergeant who opened Billy's mind and died in his arms. Over the course of this day, Billy will begin to understand difficult truths about himself, his country, his struggling family, and his brothers-in-arms. In the final few hours before returning to Iraq, Billy will drink and brawl, yearn for home and mourn those missing, face a heart-wrenching decision, and discover pure love and a bitter wisdom far beyond his years.

Poignant, riotously funny, and exquisitely heartbreaking, "Billy Lynn's Long Halftime Walk" is a devastating portrait of our time, a searing and powerful novel that cements Ben Fountain's reputation as one of the finest writers of his generation.

Robert and Emily both loved this one.  Robert says:


Ben Fountain has created a sort of inverted Odyssey here where our hero, Billy Lynn, comes home from the Iraq war to find yet a whole new catalog of trials and challenges awaiting him and the rest of Bravo company before they are shipped back to the Gulf.

The book takes place on the final day of that tour, Thanksgiving at a Dallas Cowboys football game where Bravo company are guests of honor. Here the stadium itself becomes a socioeconomic archeological dig where all of America can be seen in the various levels of class and character on display.

In the end, the novel not only gives us a fresh take on how we view capitalism, materialism, ourselves, our country, and our military, but provides a wonderfully empathetic tragic-hero in Billy Lynn, at once a brave, fearless fighting machine while still a very innocent and confused young man One choice can transform you- or it can destroy you. But every choice has consequences, and as unrest surges in the factions all around her, Tris Prior must continue trying to save those she loves, and herself.  All while grappling with haunting questions of grief and forgiveness, identity and loyalty, politics and love.

Tris's initiation day should have been marked by celebration and victory with her chosen faction; instead, the day ended with unspeakable horrors. War now looms as conflict between the factions and their ideologies grows. And in times of war, sides must be chosen, secrets will emerge, and choices will become even more irrevocable--and even more powerful. Transformed by her own decisions but also by haunting grief and guilt, radical new discoveries, and shifting relationships, Tris must fully embrace her Divergence, even if she does not know what she may lose by doing so.

I loved the first book in this series, Divergent, but haven't gotten my hands on the ARC for the new one yet.  It's a pretty hot item around the bookstore right now.  But Emily has read it and she says:


I tend to be disappointed by the second book in a series, but this was a very strong follow-up to Divergent - suspenseful but not repetitive, bringing in new ideas and information about the world. It felt like the author had a plan for the whole story before the first book was published. I can hardly wait for book 3!

This series is a great one for Hunger Games fans, and with two books out, now would be a great time to pick it up and join the fun!

Jeneration X: One Reluctant Adult's Attempt to Unarrest Her Arrested Development; Or, Why It's Never Too Late for Her Dumb Ass to Learn Why Froot Loops Are Not for Dinner, by Jen Lancaster In Such a Pretty Fat, Jen Lancaster learned how to come to terms with her body. In My Fair Lazy, she expanded her mind. Now the New York Times bestselling author gives herself, and her generation, a kick in the X, by facing her greatest challenge to date: acting her age. Jen is finally ready to put away childish things (except her Barbie Styling Head, of course) and embrace the investment-making, mortgage-carrying, life-insurance-having adult she’s become.

From getting a mammogram to volunteering at a halfway house, she tackles the grown-up activities she’s resisted for years, and with each rite of passage she completes, she’ll uncover a valuable, and probably humiliating, life lesson that will ease her path to full-fledged, if reluctant, adulthood.

We are excited to host Jen for an author event on Tuesday, May 8th at 7:00 PM.  The event will have signing line tickets, so call us today and get to the front of the line to meet this hilarious and genuine, reluctant adult.
at 11:08 AM No comments: