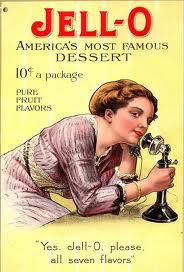 One of the great things about used books, besides the price, is the history.  With any luck, you've picked out a used book that's been read and loved by it's previous owner; maybe you're sharing a favorite book with a complete stranger, and you don't even know it!

Well, we love buying your used books because of all of the great things we find tucked inside and forgotten about in those books.  You can't even imagine how many bookmarks we've collected.  We have countless photos, loads and loads of postcards.  Sometimes we'll stumble upon a heartfelt note, or drawing.  You can see a lot of these treasures hanging on the walls around the used book counters in both of our stores.  Here is one of my favorites from the Ravenna store; a poem, handwritten in pencil on a scrap of paper.  We're not sure if it was copied from somewhere, but the scratch-outs seem to indicate the artistic process of the unknown poet.


J-e-l-l-o Phone
I do not want a telephone,
I'd rather have a Jello-phone.
Instead of button pushing behaviors,
We'd dial by licking yummy flavors.
So, if my number were 9-8-9...
My flavor would then be lime-grape-lime.
And you know how a hot phone on your ear leaves a welt,
Well, the jello-phone you see, it would just melt.
Or if you drop it on the floor,
It'll bounce right back where it was before.
And instead of a ring when you get a call,
It jiggles and wiggles right off of the wall.
And if you find telemarketers pernicious
just hang up and eat it...it's delicious.
at 3:16 PM No comments:

Not sure what to be for Halloween?  Here are some spooky literary options for you. 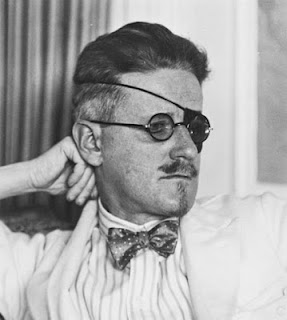 How about James Joyce.  A dapper bow tie, an eye patch, some well-groomed facial hair, and a copy of Ulysses.
Companion Costume:  June 16th aka, Bloomsday. 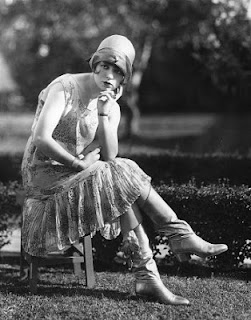 Or perhaps Daisy Buchanan?  Recycle that flapper costume from 3 years ago. Pair it with a constantly lit cigarette and a copy of The Great Gatsby.
Companion Costume:  A yellow Rolls-Royce. 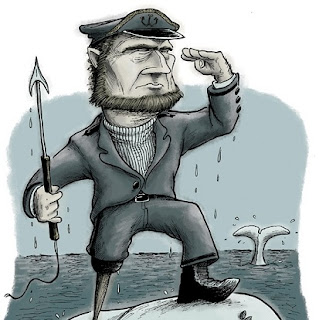 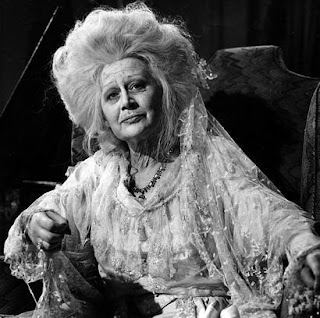 Maybe Dickens is more your style...try Miss Havisham.  All you need is a decaying wedding, dress-maybe covered in spider webs, lifelong disappointment, and a copy of Great Expectations.
Companion Costume: Moldy wedding cake.
at 7:38 PM No comments: The Orchardist, by Amanda Coplin

Now, normally Read This Book features a recent favorite from one of our lovely staff.  But this time around, we've got- not one, not two, but THREE booksellers (plus one former used-book-buyer in New Zealand) telling you to READ THIS BOOK!

Set in the untamed American Pacific Northwest, a highly original and haunting debut novel about a makeshift family whose dramatic lives are shaped by violence, love, and an indelible connection to the land.

Writing with breathtaking precision and empathy, Amanda Coplin has crafted an astonishing debut novel about a man who disrupts the lonely harmony of an ordered life when he opens his heart and lets the world in. Transcribing America as it once was before railways and roads connected its corners, she weaves a tapestry of solitary souls who come together in the wake of unspeakable cruelty and misfortune, bound by their search to discover the place they belong. At once intimate and epic, evocative and atmospheric, filled with haunting characters both vivid and true to life, and told in a distinctive narrative voice, The Orchardist marks the beginning of a stellar literary career.

Emily says:
Coplin has captured a time when solitude was more common and more accepted as a way of life, and the rhythms of the seasons played a greater role. Subtle characters communicate through gesture more than dialogue, delivering a quiet intensity in this remarkable debut novel. I was completely transported.

Jane, Judy, and Kestrel agree wholeheartedly!
at 2:46 PM No comments: 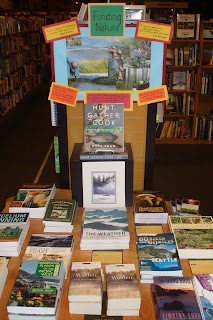 You still have a week left to check out our October theme table.  This month, the tree table is (fittingly) dedicated to nature.  It's got hiking, exploring, foraging, gardening, everything nature-y.  Rory has picked out some great titles to get you out.

Part of the great thing about so many of the titles on this table is their connection to our very own Pacific Northwest.  Garden guides, and foraging guides tailored to our region, but also fantastic local authors.  We are blessed with so many great authors, that sometimes we forget just how many live among us.  Come down and check them out! 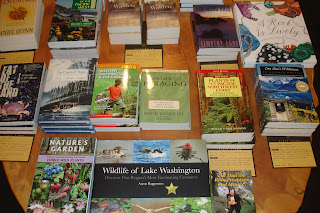 It's officially fall.  I don't need the shorter days, crisp evening air, or falling leaves to tell me.  I need only look to the overloaded new arrivals tables in the store.  Seriously, we are bursting at the seams with new stuff.  Come and check out all the awesomeness.  I am beside myself this fall.  It's like the publishers were choosing their new books just for me!  Here is my fantasy fall reading list: I have read a lot of Chabon, not all, but most.  It all started with The Amazing Adventures of Kavalier and Clay.  It has my all-time, favorite, literary moment, and I say that with conviction.  I don't have a favorite book (there are just too many), but I do have a favorite moment in a book, and Micheal Chabon wrote it.  That's why I was so excited about Telegraph Avenue.  Early reviews claim it's his greatest since Kavalier and Clay.  Maybe I will stumble upon my second-favorite, literary moment.  Joy! Given the amount of Stephen Colbert references I have shamelessly posted on this blog, you must have known this was coming.  AND IT"S IN 3D!!! The Girl Who Fell Beneath Fairyland and Led the Revels There, by Catherynne M. Valente

Valente's first Fairyland adventure, The Girl Who Circumnavigated Fairyland in a Ship of Her Own Making, was spectaular.  You really need to read it first, but don't worry, it will be worth it.  Here's my review of the first one...

I've read comparisons of this book to Alice in Wonderland, but I can't help thinking that such comparisons diminish the originality, charm, and delight of this book. September lives in Nebraska, her father is off fighting in the war and her mother works in the factory. But her lonely life is turned upside down when the Green Wind appears at her window and sweeps her away to fairyland.

Collecting loyal friends including a protective green jacket, a wyvern, and a determined key, September sets out for fun, adventure, and even peril. This book is a joy to read with plenty of grown up stuff to keep adults up long after bedtime. Valente's writing is enchanting, sometimes poignant, as she weaves sweet stories and universal truths that I think are entirely absent in Alice's Adventures in Wonderland. Louis D. Brandeis:  A Life , by Melvin I Urofsky

No, I didn't add this one to make myself seem smarter...it would appear that my time in school is beginning to skew my reading appetites.  I can't wait to sink my teeth into this (rather HUGE) biography.  Here's the blurb from the back...


Brandeis witnessed and suffered from the anti-Semitism rampant in the United States in the early twentieth century, and with the outbreak of World War I, became at age fifty-eight the head of the American Zionist movement. During the brutal six-month congressional confirmation battle that ensued when Woodrow Wilson nominated him to the Supreme Court in 1916, Brandeis was described as “a disturbing element in any gentlemen’s club.” But once on the Court, he became one of its most influential members, developing the modern jurisprudence of free speech and the doctrine of a constitutionally protected right to privacy and suggesting what became known as the doctrine of incorporation, by which the Bill of Rights came to apply to the states. In this award-winning biography, Melvin Urofsky gives us a panoramic view of Brandeis’s unprecedented impact on American society and law. I love Moby Dick.  I LOVE IT.  It took me 30 years to decide that I wanted to read it, and when I did...it changed my life.  There's a long story about why I finally decided to read it, and it may or may not involve W.R.A.T.H. (Whales Rising Against the Humans (which also requires a disclosure that W.R.A.T.H. is a completely fictitious organization that I created consisting of 3 members...we have a logo)), but I did read it.  And I wear that as a badge of honor.

There are a lot of books out there, "classics," if you will, which enter into a sort of grand checklist- any self-respecting book lover/bookseller is assumed to have read them.  But no one can get around to ALL of them, especially the ginormous ones.  Out of the many bookstores I have worked in and even more booksellers I count among my dear friends, I find Moby Dick to be the one "classic" that is missed most...and it, the GREAT AMERICAN NOVEL!  Maybe it's the hefty size, or being forced to read it in high school, or the ever-feared chapters on knot-tying.  So yes, I take a certain pride in having read it.  Especially when all of my coworkers are so well read; slogging through David Foster Wallace, while I tuck into a romance novel (no judgment!).  Moby Dick is the heart of my bookseller street cred.

My love for Moby Dick could fill its own blog.  It has led me to non-fiction reading tangents, whale watching trips, collecting paint-by-number nautical art, boycotting aquariums, possible tattoo designs, and a belief that I can summon whales (another long story)...it doesn't seem to end.  Finally, I am so happy to report, that you too can share in this life-altering piece of classic American art.  And it's fun too...I promise.  Though I'm reasonably sure you can enjoy it without the obsessiveness that has affected me.

The Moby Dick Big Read, a new website/art installation, has undertaken the grand task of offering this magnificent tome to you, free of charge, downloadable, and read by some of today's most awesome people.  I'm talking Tilda Swinton, and Stephen Fry, and so many more.  Ah-mah-zing!  As of September 16th, this awesome art collaboration has been posting a chapter a day; downloadable, completely free, and accompanied by the most amazing original art.  Here is a little bit from their website:

‘I have written a blasphemous book’, said Melville when his novel was first published in 1851, ‘and I feel as spotless as the lamb’. Deeply subversive, in almost every way imaginable, Moby-Dick is a virtual, alternative bible – and as such, ripe for reinterpretation in this new world of new media. Out of Dominion was born its bastard child – or perhaps its immaculate conception – the Moby-Dick Big Read: an online version of Melville’s magisterial tome: each of its 135 chapters read out aloud, by a mixture of the celebrated and the unknown, to be broadcast online in a sequence of 135 downloads, publicly and freely accessible.

So this is it.  If you've ever wanted to be a part of that select group of people who have tackled, and adored Moby Dick, now is your chance.  I myself can't wait to submerge once again into the depths of this truly remarkable, life-altering masterpiece.  Join me, won't you?