On This Day in (Literary) History 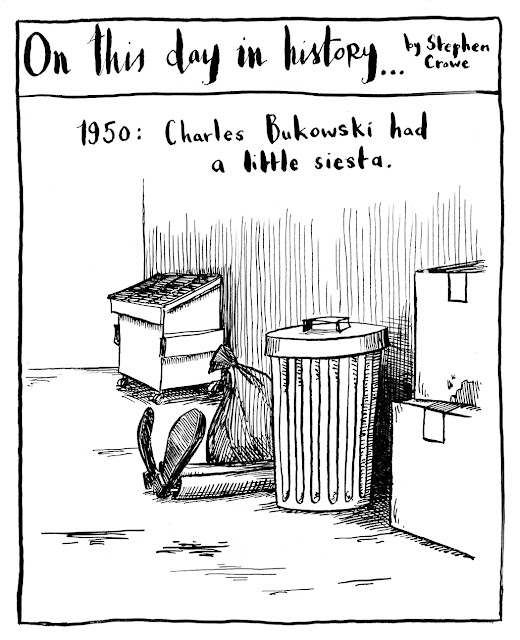 Labels: Charles Bukowski, On this day in history
Email ThisBlogThis!Share to TwitterShare to FacebookShare to Pinterest

In which I review a book everyone else read five years ago.

I have never been known for my ability to keep abreast of all things pop culture-y. I still have my VCR. Which you might think is silly, but I get the cheapest movies at Value Village. Cheaper than Blockbuster even.

This inability to keep up (with the Kardashians) extends to my reading life. I spend a lot of time reading books published outside the current decade, so when I do read a "new book" most everyone else has already read it... five years ago.

But since I'm in charge of the blog, I can post whatever review I want, no matter how irrelevant it is. So here you go. 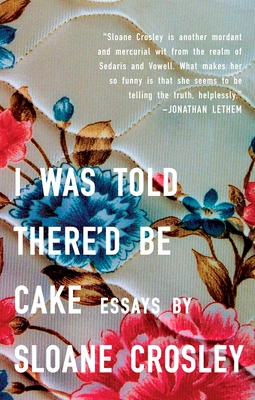 I Was Told There'd Be Cake by Sloane Crosley

This book is guaranteed to make you feel better about yourself. Almost every other essay, I found myself saying, "well, at least I've never done that."

Crosley pulls no punches in relating the miseries and embarrassments of her early adulthood. Failed relationships, and terrible jobs feature prominently. Her piece on being the reluctant maid of honor for her not-so-close friend is particularly hilarious.

Here you find the best friend, you're not quite sure you want. She's crass and selfish, sometimes mean, and will almost certainly get you into trouble. But she does it all with such wit and humor, it's difficult not to be charmed.

Reading as a Contact Sport, or how to read a 700 page novel told in multiple voices (many with a thick Jamaican dialect) 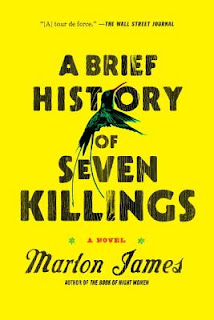 Marlon James’ A Brief History of Seven Killings (Riverhead) is a complex beast of a novel. It is angry, rough and bloody but also nimble, playful and kind. It is a little intimidating to approach, but once you are engaged with it, it is an incredibly rewarding experience.

I was a little apprehensive about attempting this novel at first. I actually managed to successfully avoid reading it for almost a full year. But it kept popping up wherever I looked : amazing reviews, a finalist for the National Book Critics Circle Award, more amazing reviews, a shortlist finalist for the Man Booker Prize and even an appearance on Late Night with Seth Meyers (if that guy could make time for this book, so could I).

So I dove in, but decided to give myself some help along the way. What resulted was a fully immersive experience of this novel, an adventure everyone might not have the time or inclination for, but I highly recommend (I’m looking at you Man Booker Prize jury members).
When you’ve decided you’re going to tackle a 700 page novel, you have to carve out time every day to get to it. It’s a bit of a task at first, especially after work, meetings, and helping coach your daughter’s soccer practice, but it soon becomes addictive. My first week I read about 200 pages of the book (I’m pretty sure there were already more than seven killings by then, but I wasn’t expecting anything simple or straightforward from this “brief” novel).

It was then that I remembered a friend of mine had mentioned that he had listened to the audio version of this book on a road trip earlier this year. I got the audio and started alternating between the two experiences of the book, listening to the audio on my morning walk to work and reading the book itself at night. I usually don’t listen to fiction as I don’t want an actor’s interpretation of the author’s voice to muddy my experience of that voice. But this novel, told exclusively in first person voices, seemed extremely well suited to the audio-book experience. With an immensely talented eight person cast, this novel, especially the Jamaican characters, began living in my head in a way that sort of super-sized what was already a healthy meal of a book. 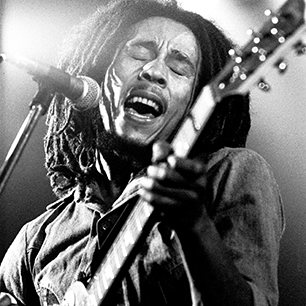 I then discovered Marlon James’ Spotify playlist for the book. Soon making dinner at home was accompanied by Bob Marley’s Natty Dread (the 1976 assassination attempt on Marley is the central planet around which the voices in this novel orbit) and the sounds of Ina Kamoze and Damien Marley. But, as the novel moves its way into the eighties and into the US, we also were listening to Andy Gibb’s Shadow Dancing and Herbie Hancock’s Rockit (I don’t think I have heard Rockit since my brother and I were laying down cardboard in our garage and practicing how to do a windmill in 1983 – it was fun to hear it again, but around the third time it came on my wife began asking how much longer until I was done with the book). 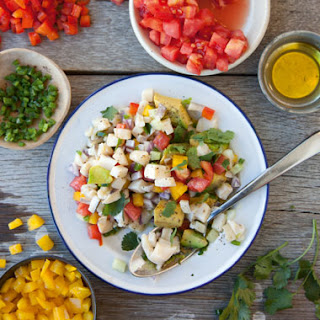 When you start listening to reggae in your kitchen, you start looking around for the conch and the jerk seasoning (at least I do). I clearly wasn’t going to find conch in Seattle, but I was willing to improvise. Digging through my cookbooks I came across a number of amazing recipes by Chef NormanVan Aken that clearly were going to satisfy the cravings that this book had conjured up in my belly. The family and I spend the next week enjoying Conch Fritters (cod for conch), Conch Salad (prawns for conch) and Jerk Pork Chops with Golden Pineapple Chutney.

It was a perfect way to end my summer. I’m sure I won’t read a better novel this year and it will certainly be a long time before another novel consumes my life and inspires me to immerse myself its world the way Marlon James’ masterpiece did.

I've heard this book compared to many others. Some have compared it to being like a Tarantino film, the works of Faulkner and Robert Bolano’s Savage Detectives. I kept thinking about Peter Matthiessen’s Shadow Country in that it also had multiple voices around a single violent incident, as well as the works of William Gaddis who also has kinetically charged monologues that propel his narratives along (I discovered afterwards an interview with Marlon James from a number of years ago where he mentioned reading Gaddis – probably during the time he was working on this novel). In the end however, A Brief History of Seven Killings is one of those unique books that really defies comparison. It is a book that will become an intimidating measuring stick against which to judge other bold, ambitious and gloriously reckless novels in years to come.

Between the World and Me by Ta-Nehisi Coates 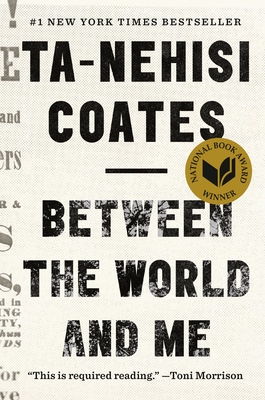 This book is everywhere, with good reason. Many of us here at Third Place Books have read it. Here are two of our booksellers on why you should read it too:

You are unlikely to read a more important book about race this year. Coates' letter to his 15-year-old son is provocative, upsetting, inspiring, and, like any passionate argument, an emotional roller coaster ride. It is the beginning, not the end of a much needed conversation.

We all bring a lifetime of experiences to whatever book we read. I read Between the World and Me, keeping in mind that I am the father of a black son. My wife is also black. Being a white father, I cannot pass on the experiences of being a black man in America. As a member of white society, I can walk blithely through life unaware of the biases and profiling that affects my own family.

Between the World and Me is a memoir, written in the form of a letter to the writer’s fifteen-year-old son. Ta-Nehisi Coates is a black father, and in this book he relates his own experiences of growing up black in America. Sometimes he is quite angry – rightfully so – and his narrative is always personal and emotionally powerful. He’s not just talking about slavery and the subjugation of the African-American people, but the fact that America’s success was built on the backs of these people.

He uses direct quotes to dispute dangerous ideas, such as the Civil War not being fought over slavery. Coates covers institutional racism, and how most of us are deluded by this idea of whiteness, also known as “the American Dream”. There is a lot to digest in just over one-hundred and fifty pages, especially for those of us only familiar with the winner’s interpretation of history.

Every once in a while, a book deserves the exalted status it’s being given, and Between the World and Me is one of those books.