Sunday evening I gave Yann Martel permission to use the bathroom. I was about to escort him to the podium for his Third Place presentation introducing Beatrice and Virgil, but the humility of this struck me – bestselling Booker-prize winning author Yann Martel asked me if he could have 5 minutes?  But in reflection it was not unusual – like virtually every author we are so fortunate to meet in this job, Yann Martel is above all a lovely, thoughtful person. 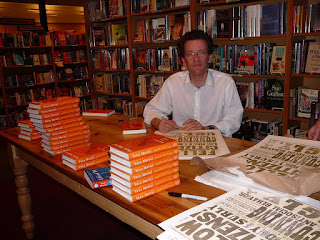 He entertained the crowd, many of whom said that of the frequent readings they attend, his stood out as one of the very best. He won many hearts when he shared his now-well-known story of Barack Obama writing to him after he and his daughter read Life of Pi, to thank the author. This is in sharp contrast to his own country’s leader, Stephen Harper, whom he described as “George Bush Light.” At least Mr. Bush was known to have read a book now and then, while the Canadian prime minister seems to be without what Martel refers to as the capacity for “stillness.”
So Martel sends him a carefully selected book, with a thoughtful letter, every two weeks, and he is now on Book 79. (http://www.whatisstephenharperreading.ca/)

Book clubs needing a new list could do worse than following what Martel’s mailed to the leader. The Prime Minister has not replied.

The friendly, enthusiastic Canadian greeted every fan, posed for all photos, and inscribed books and the Third Place commemorative broadsides for over an hour after his reading. On Tuesday I went with Ridley Pearson to two elementary schools, where he talked about his new Disneyland adventure, Disney in Shadows, about kids who become holograms. A bestselling author of thrillers for adults, his relatively recent, and very successful, foray into kids’ books seems like a perfect match. He captivates his audiences and shares the same delight as the kids with the magic of Disney and the thrill of scary, spine-tingling mystery. When he arrived for his in-store event and saw that Jacqueline Winspear was about to speak to an overflowing Den, and the larger stage venue was reserved for him, he insisted that we switch spaces – a very good call and one made purely from his respect and appreciation for another author. (They had never met, except in cyberspace, so it was fun to see them greet each other.) 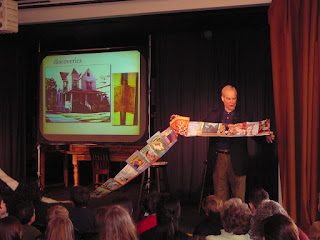 And Friday morning Third Place reverberated with the excitement of 400 plus elementary school kids, here to see Andrew Clements on a rare book tour. Again, a more gracious gentlemen one could not hope to meet. He told his personal memories (with slides) and emphasized that everyone has “history” and can draw on it to write stories. Since Andrew and I were at rival Big Ten schools studying English the same years, and enjoyed a laugh over that, I think I appreciated his family photos at least as much as the kids did. He also enthusiastically told me about writing Double Trouble in Walla Walla, which uses his collection of words that rhyme in this way – and then thanked me in an inscription for a “super duper” event.

People often ask “What are famous writers really like?” They expect some stories of arrogance and aloofness, I suspect. But I was reminded this week why I am continuing to go with my usual answer: “Better than you can imagine!”