Looking for a beach read for the sunny days ahead?  As I was shelving today, I came across this book.  Poisoned: The True Story of the Deadly E. Coli Outbreak That Changed the Way Americans Eat.  It's new in paperback, and really interesting, with a Seattle connection, and compelling story that keeps you reading.  And while I thought it was a great book, The New York Times thinks it should be your next beach read.  Here's the beginning of their blurb on the front cover...Your perfect beach book has arrived.  I guess I never thought of e. coli as beach book material.  To be honest, I've never thought of non-fiction as beach book material.

But why not?  Why can't non-fiction be a beach read?  So, here are a few more ideas for beach reads with a little more substance. 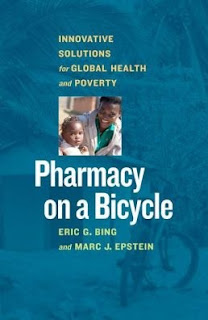 Pharmacy on a Bicycle: Innovative Solutions for Global Health and Poverty by Eric G. Bing and Marc J. Epstein

Every four minutes, over 50 children under the age of five die. In the same four minutes, 2 mothers lose their lives in childbirth. Every year, malaria kills nearly 1.2 million people, despite the fact that it can be prevented with a mosquito net and treated for less than $1.50.

In this profoundly important book, Eric G. Bing and Marc J. Epstein lay out a solution: a new kind of bottom-up health care that is delivered at the source. We need microclinics, micropharmacies, and microentrepreneurs located in the remote, hard-to-reach communities they serve. By building a new model that “scales down” to train and incentivize all kinds of health-care providers in their own villages and towns, we can create an army of on-site professionals who can prevent tragedy at a fraction of the cost of top-down bureaucratic programs.

Bing and Epstein have seen the model work, and they provide example after example of the extraordinary results it has achieved in Africa, Asia, and Latin America. This is a book about taking health care the last mile—sometimes literally—to prevent widespread, unnecessary, and easily avoided death and suffering. Pharmacy on a Bicycle shows how the same forces of innovation and entrepreneurship that work in first-world business cultures can be unleashed to save the lives of millions. Bunker Hill: A City, a Siege, a Revolution by Nathaniel Philbrick

Boston in 1775 is an island city occupied by British troops after a series of incendiary incidents by patriots who range from sober citizens to thuggish vigilantes. After the Boston Tea Party, British and American soldiers and Massachusetts residents have warily maneuvered around each other until April 19, when violence finally erupts at Lexington and Concord. In June, however, with the city cut off from supplies by a British blockade and Patriot militia poised in siege, skirmishes give way to outright war in the Battle of Bunker Hill. It would be the bloodiest battle of the Revolution to come, and the point of no return for the rebellious colonists.

Philbrick brings a fresh perspective to every aspect of the story. He finds new characters, and new facets to familiar ones. The real work of choreographing rebellion falls to a thirty-three year old physician named Joseph Warren who emerges as the on-the-ground leader of the Patriot cause and is fated to die at Bunker Hill. Others in the cast include Paul Revere, Warren’s fiancé the poet Mercy Scollay, a newly recruited George Washington, the reluctant British combatant General Thomas Gage and his more bellicose successor William Howe, who leads the three charges at Bunker Hill and presides over the claustrophobic cauldron of a city under siege as both sides play a nervy game of brinkmanship for control. Everyone Loves a Good Train Wreck: Why We Can't Look Away by Eric G. Wilson

Whether we admit it or not, we’re fascinated by evil. Dark fantasies, morbid curiosities, Schadenfreude: as conventional wisdom has it, these are the symptoms of our wicked side, and we succumb to them at our own peril. But we’re still compelled to look whenever we pass a grisly accident on the highway, and there’s no slaking our thirst for gory entertainments like horror movies and police procedurals. What makes these spectacles so irresistible?

In Everyone Loves a Good Train Wreck, the scholar Eric G. Wilson sets out to discover the source of our attraction to the gruesome, drawing on the findings of biologists, sociologists, psychologists, anthropologists, philosophers, theologians, and artists. A professor of English literature and a lifelong student of the macabre, Wilson believes there’s something nourishing in darkness. “To repress death is to lose the feeling of life,” he writes. “A closeness to death discloses our most fertile energies.”

His examples are legion and startling in their diversity. Citing everything from elephant graveyards and Susan Sontag’s On Photography to the Tiger Woods sex scandal and Steel Magnolias, Wilson finds heartening truths wherever he confronts death. In Everyone Loves a Good Train Wreck, the perverse is never far from the sublime. The result is a powerful and delightfully provocative defense of what it means to be human—for better and for worse.
at 1:00 PM