Adding to the avalanche of end of the year lists, it's time for our annual bookseller top tens.

THE RULES:  None really.  The only rule that must be followed is that any book on the list must have been read in 2013.  Otherwise anything is fair game.  Fiction, non-fiction; kids books, adult books; published last year, or any other year.  Even audio books are allowed!

This annual list is one of our favorite things to do, so we hope you enjoy them as much as we do!  I've gotten quite a few responses so this will be a multiple-post feature so as not to inundate you.  Here we go!

Erin B. at Ravenna
I'm starting with me because I went last last year.  Also because I can.  I'm a power-hungry blogger.

The Goldfinch by Donna Tartt
Stoner by John Williams
Battleborn by Claire Vaye Watkins
Amor and Psycho by Carolyn Cooke
A Visit from the Goon Squad by Jennifer Egan
Unmastered: A Book on Desire Most Difficult to Tell by Katherine Angel
New York Stories Everyman's Pocket Classics edited by Diana Secker Tesdell
The Maid's Version by Daniel Woodrell
The Goldfinch by Donna Tartt- Yes, I know it's on here twice, but I read it twice and I really did love it that much

My list only has eight books because there just weren't ten that I LOVED.  But don't feel bad for me; Stoner and The Goldfinch landed on my very elite, all-time favorites list. 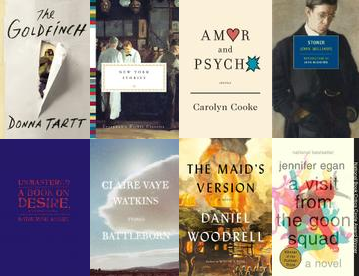 Erin J. at Lake Forest Park
Keeping the Erins together for no other reason than that our names are the same.  Also I think her lists are super interesting.

1. A Time for Everything by Karl Ove Knausgaard
2. Buzz Aldrin, What Happened to You in All the Confusion by Johan Harstad
3. Life is Elsewhere by Milan Kundera
4. The Adventures of Sherlock Holmes by Arthur Conan Doyle
5. The Greenlanders by Jane Smiley
6. The Luminaries by Eleanor Catton
7. Italian Folktales by Italo Calvino
8. A Constellation of Vital Phenomena by Anthony Marra
9. Vampires in the Lemon Grove by Karen Russell
10. The Night Guest by Fiona McFarlane 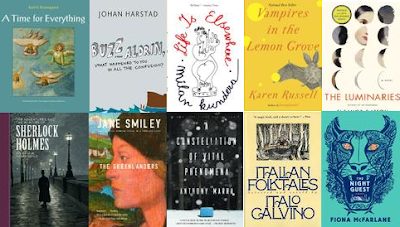 Alex at Ravenna
Alex had to redo his list because he's not so good with directions.  For as much as he talked about Independent People this year, I was surprised when I didn't see it on his list.  I asked him about it, and he said, "Oh, I thought they had to be published this year." His revised list is below, starring Independent People.

1. Independent People by Halldor Laxness
2. Hild by Nicola Griffith
3. Monument Road by Charlie Quimby
4. Wandering Goose: A Modern Tale of How Love Goes by Heather Earnhardt
5. Daughter of Smoke and Bone by Laini Taylor
6. Everything Happens As It Does by Albena Stambolova
7. The Ocean at the End of the Lane by Neil Gaiman
8. Americanah by Chimamanda Adiche
9. Hyperbole and a Half by Allie Brosh
10. The Riyria Revelations (Books 1-3) by Michael J Sullivan 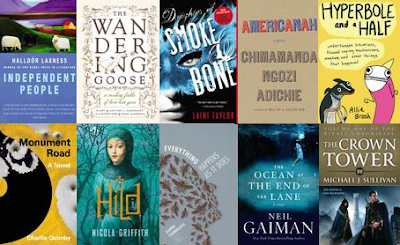 Emily A. at Lake Forest Park
Emily's list is like gazing at the future in a crystal ball.  She really took the "not many rules" rule to heart...five of her books haven't even been released yet.  That's just being a bit of a tease really.  AND her top ten has eleven books.  Again!  She did this last year too! 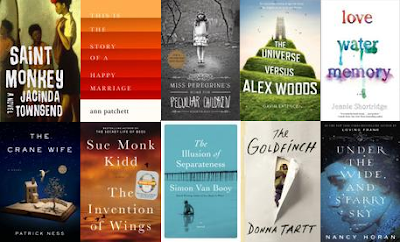 Jim at Lake Forest Park
Jim is a new addition to the Bookseller Top Ten.  He's not a new employee, he just didn't give us a list last year.   Maybe he didn't read ten good books in 2012.  Maybe he read too many good books in 2012 and just couldn't decide.  Maybe he forgot.  Well, whatever the reason, we're glad to have his list this year...even if his top ten also has eleven.

The Drunken Botanist: The Plants That Create the World's Great Drinks by Amy Stewart
The Illusion of Separateness by Simon Van Booy
How To Think More About Sex by Alain De Botton
The Interestings by Meg Wolitzer
Memories of a Marriage by Louis Begley
This Is Between Us by Kevin Sampsell
Middle Men by Jim Gavin
At The Bottom of Everything by Ben Dolnick
A Marker To Measure Drift by Alexander Maksik
Nine Lives: A Chef's Journey from Chaos to Control by Brandon Baltzley
In the Body of the World by Eve Ensler 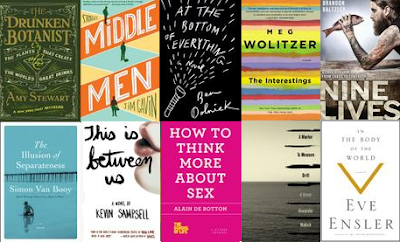 Patti H. at Ravenna
Patti's the coolest.  She got to meet one of the authors on her list this year.  Matthew Kirby!  He was also on her top ten list last year with Icefall.  Patti really likes Matthew Kirby.  Patti would like to apologize to Matthew Kirby for acting like a somewhat starstruck, and blithering idiot (her words). 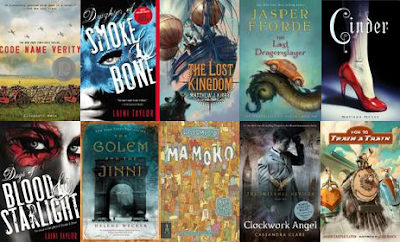 Annie at Lake Forest Park
Annie has a most awesome list this year.  She's got one of my ALL-TIME favorites, The Shipping News, and she's also got the mid 1990's kid's series Animorphs.  Oddly enough, Annie is not the only Third Place employee to re-read Animorphs this year.  Ami at Ravenna also read them.  Weird.

1. The Shipping News by E. Annie Proulx
I read it in college, and decided I needed to reread it this year. It was just as beautiful and gut-ripping as I remembered.
2. Allegiant by Veronica Roth
I know readers had conflicting feelings about the ending to the Divergent trilogy, but I absolutely loved every page of this final book!
3. The Animorphs Series by K.A. Applegate
Technically a full series, but I've only read the first few of 54 (plus supplemental books...). This is a series I read as a kid and absolutely adored. I've been plotting my reread for a while, and so far, the books are holding up to my adult expectations of science fiction.
4. Texas Gothic by Rosemary Clement-Moore
One of the funniest teen supernatural writers ever! This is my favorite of hers outside the Molly Quinn vs. Evil series.
5. Origin by Jessica Khoury
A superb YA that takes place in the near future involving an immortal clone and set in the rainforest of South America
6. The Burning Sky by Sherry Thomas
High fantasy YA style with a splash of 1920s Britain added in for fun.
7. Wild by Cheryl Strayed
I hardly ever read nonfiction, and I read this at my mom's urging. It was stupendous, and it made me want to get outside.
8. Where'd You Go Bernadette by Maria Semple
Also totally different than the fiction I usually read, but I still loved every minute of it.
9. Don't Want to Miss a Thing by Jill Mansell
The newest book by my favorite chick lit author. Hysterical and romantic, I feel like she gets better with each new book.
10. Boy Meets Boy by David Levithan
Another reread from my college years. David Levithan is my all time favorite contemporary YA author. Reading this book again was like remembering what being in love as a teenager was all about. 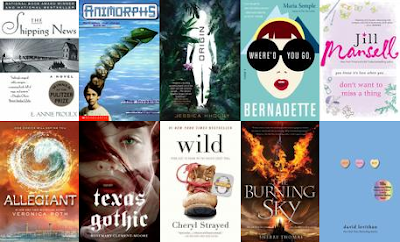 Ami at Ravenna
Speaking of Animorphs and Ami.  Here is Ami's super cool list.  Sadly she read ten other books that were just slightly better than Animorphs, so the series didn't quite make her list.  But I'm willing to give them an honorary eleventh spot.

1. Speedboat by Renata Adler
2. I Love Dick by Chris Kraus
3. Stoner by John Williams
4. Are You My Mother? by Alison Bechdel
5. Tenth of December by George Saunders
6. I Await the Devil's Coming by Mary Maclane
7. Taipei by Tao Lin
8. Spectacle by Susan Steinberg
9. Mr Fortune by Sylvia Townsend Warner
10. What Purpose Did I Serve in Your Life? by Marie Calloway 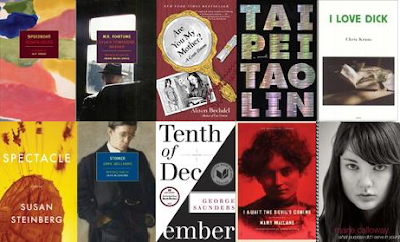 Robert at Lake Forest Park
As Managing Partner of Third Place Books and our fearless leader, perhaps I should have posted Robert's list first.  But his list is so detailed and well organized that it just didn't seem fair to make someone go right after him.  Last year Robert had Stoner on his top ten.  I read it and it ended up on my 2013 top ten.  I'm hoping the same thing happens with Infatuations for my 2014 list.  Here it is...

In putting together this list I found some interesting similarities in the books I loved from the past year.

Novels That Should Have Been on The National Book Award Short List (or at least the long list for crying out loud)
All That Is by James Salter - This book is so rich in its humanity. It basks in the simple yet extraordinary pleasures and pains of what it is to live a life. Easily my favorite book of the year.
The Son by Philipp Meyer – This is an amazing epic story. Brutal.

Novels About Time and Place and the Unexpected Scars that History Leaves Behind
The Sound of Things Falling by Juan Gabriel Vasquez – This outstanding Colombian novel is a moving tale about the balance between choice and fate and how memory and the way we tell the tales of the past can influence how we live.
Double Negative by Ivan Vladislavic – This novel of South Africa gives a window into that country’s recent history that is fresh and unexpected.

Mystery Novels for a Non-Mystery Novel Reader
The Infatuations by Javier Marias – This is a novel you read not for plot but for the long, no stone left unturned, passages of thought about the potential motivations behind human behavior. Then it turns into a bit of a Hitchcock film (in a good way).
The Night Guest by Fiona McFarlane – This is a wonderfully unsettling tale of solitude, dependency and the tricks the mind can play on itself.

Odd Fiction
Hawthorn and Child by Keith Ridgway – This is one of those books I selectively recommend, but for the right reader it is incredibly powerful. It’s like Harold Pinter and David Lynch collaborating on a novel.
The Tenth of December by George Saunders – In the past I always thought of Saunders’ stories as too self-conscious. But this collection really surprised me in how deep these stories were in their feeling and emotion.

Books That Don’t Seem Like They Belong on the Same List
Dr. J by Julius Erving – Yes, basketball fans will love this book. But its surprising insights and candor about fame, wealth, and growing up as a black kid in the 50’s and 60’s, makes is a much bigger book than a typical star memoir.
The Great War by Joe Sacco – I’ve been a fan of Sacco’s graphic journalism for a while. But this work of art on the Battle of Somme is truly a masterwork. Sit with the book for 10 minutes and you’ll find yourself still sitting an hour later going back and forth over these incredible images. 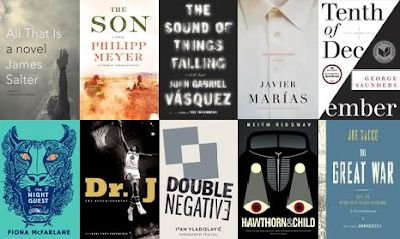 So that's it for the first installment of 2013 Bookseller Top Tens.  Stay tuned for more soon!
at 6:06 PM