Fresh from the Vault

Go Set a Watchman. It's the only thing anyone is talking about. Except Stephen. Our newest bookseller at Lake Forest Park has imagined what other famous first drafts publishers could release. I really think someone should write number four. I would read it. Check it out.

Following the rampaging success of Go Set a Watchman, the recently rediscovered early version of Harper Lee's beloved classic To Kill a Mockingbird, what other lost works are being unearthed?

2. The Young Man and the Beach - Ernest Hemingway A small boy spends all day trying to catch a
lizard. When he finally gets hold of it, its tail comes off. 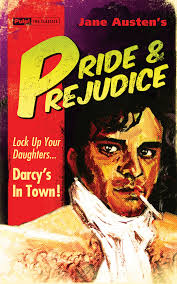 4. Pride and Prejudice - Jane Austen Lizzie Pride is a maverick detective who doesn't play by the book. Sparks fly when she's forced to partner with straight-laced police constable Darcy Prejudice.

5. Harry Potter and the Lonely Cupboard - JK Rowling A dark and tedious story about an unloved orphan trapped under the stairs by his evil guardians.