Why Eh? : The Adventures of an Adult Reader

This is the first in a series featuring Courtney, a normally, Non-YA-Reading reader, reading YA. Got it? 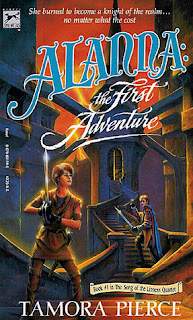 I have always had a very intense (and completely rational) fear of borrowing books from friends. Not because my dog may likely chew on them like she once did to a very expensive textbook, or because I tend to walk like a baby deer and may trip at any given moment, and the loaned book may go flying into a conveniently placed sinkhole. No, the real source of my anxiety comes from the fear of hating the book they loved so much. I would never be able to look them in the eye. I would have to completely abandon my life and start anew in a different city with a fake ID and a new name.

After enduring an incredibly passionate rant on Tamora Pierce’s books, from fellow bookseller, Lizzie, I was ordered to begin my education with The Song of the Lioness Series. She recomended these books with such a sense of awe and adoration, I began to sweat so much I became dehydrated. I have never found myself enjoying the fantasy genre so Lizzie's casual mention of sorcery and knighthood made me queasy, automatically assuming I would hate it.

But alas, like a majority of my fears it was for nothing. Thankfully I won’t have to retreat back to Alaska because I quickly fell in love with the character Alanna and the world Pierce created. Here is a book about a young girl who wants to be a knight, and instead of accepting the fact that its simply not allowed, she disguises herself as her brother in order to train. It’s a classic Shakespearean trope but unfortunately is still a relevant topic. Pierce ,though, never portrays her gender as a weakness or something incongruous with being a fighter and that is what makes all the difference. She trains among the boys, has all sorts of wild adventures, hangs out with princes and fights evil wizards and none of this is at odds with her perception of herself as a girl. Not only are these books overwhelmingly positive, but Alanna also has several romantic and sexual relationships, and the narrative contains no indication of slut- shaming or the hint that she should regret exploring her sexuality. Nor or any activities viewed as traditionally feminine are devalued either. 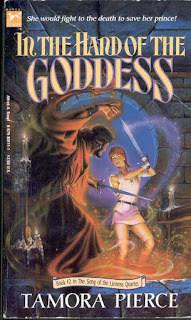 It may also be important to note that this series came out in 1984 which is practically the stone age of YA. I could rant all day about the importance of characters like Alanna to young readers, and I wish this was a series I had been introduced to in the peak of my confusion and weirdness about being a girl. Especially when the only books at my library  had only male protagonists going on adventuress or were about traditionally feminine girls and their boy troubles. And for a young queer kid such as myself who has never been comfortable with the way femininity has often been shoved my way, it would have made a world of a difference if someone would have given me these books. Preferably a magical library troll or even a cool librarian who looks like Tina Fey and later becomes the Miss Honey to my Matilda.

For now though, I have 24 more Tamora Pierce books to read and a Meg Cabot bookclub meeting to attend. So read these books, give them to everyone forever always as gifts, and bask in the amazingness that is Alanna.

(editor's note: I've used the old covers of these books because the current incarnation totally buys into gender norms and I think Alanna would disapprove.)
at 7:08 PM