"When the dust settles on the 20th century’s writers, it’s the genre authors who will be remembered" -- Connie Willis 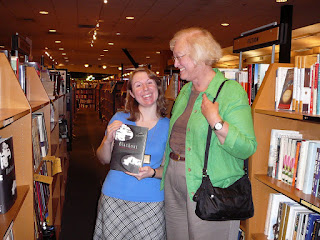 Science fiction author Connie Willis knew at 13, when she read Robert Heinlein’s Door Into Summer, that she wanted to spend her life as a writer.
Now, after 10 Hugo and six Nebula Awards, and on the release of Blackout, her first novel since 2002, she says, “How many of us get to do what we wanted to do at 13?” 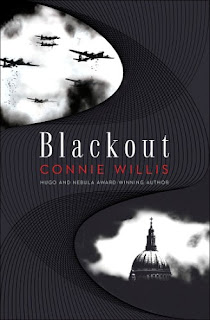 Recently inducted into the Science Fiction Hall of Fame, she reflects on her adoration of Heinlein and the fact that her first visit to a Science Fiction Convention was just a year after Heinlein’s last appearance. “It’s just as well,” she says, imagining that she would have embarrassed herself by admitting that “I even knew his cats’ names!”
Heinlein's Have Space Suit – Will Travel was also an early influence on Willis, and it was in that novel that she first encountered Jerome K. Jerome's Three Men in a Boat which later inspired her own novel To Say Nothing of the Dog. Most sci-fi readers of the time read Three Men in a Boat after Have Spacesuit; and those who did not, Willis notes, are those who didn't believe Jerome's book was real.

Willis is loyal to the sci-fi genre, in spite of its sometimes limited readership and difficulty reaching those who do not consider it “literature.” She says she has never found anything she can't do as a science fiction story.
“You can write history, romance, and mystery in the sci-fi genre,“ she observes. She laughs that people tell her ”I love your books but I don’t read science fiction,” noting that these readers think that the genre is limited to “half Star Trek, half alien-carries-off-the-beautiful-girl.” When you ask people what they associate with science fiction, she says, "Robots. You get 'robots' a lot."
Her newest novel, part one of a two-part book to be concluded with a fall 2010 publication, All Clear, is another time-travel historic fiction, with characters voyaging from 2060 Oxford to the Blitz, Dunkirk, and VE Day. It is more serious in tone, like Doomsday Book and its exploration of the Black Plague. And just as Willis followed Doomsday Book with To Say Nothing of the Dog, she's now planning a comic novel dealing with the purported Roswell UFO landings to follow Blackout and All Clear. It's important to remember, Willis says, that "history is not just cataclysms" but also a lot of fun.
While traditional historic fiction “traps characters in the midst of what’s happening,” the time travel technique allows the author to look at events with a broader perspective and draw the reader's attention to current problems. It also provides an opportunity to talk about "history, itself – not just events or time periods."
Willis sometimes wishes that books weren’t categorized by genre, but she is glad that as a child she could locate science fiction books in her town library, where she wandered the stacks looking for “the rocket ships and atom symbols” on the spines.
Besides Heinlein and the science fiction anthologies that provided Asimov, Bradbury and many other great writers in a single book, she has fond memories of the Oz books, and The Wonderful Flight to the Mushroom Planet (a book currently selling well from the Third Place children’s section). Her own reading tastes continue to be eclectic: her recent favorite books include Paul Gallico's Coronation, Alan Bennett's The Uncommon Reader, Joan Didion's The Year of Magical Thinking, and Carrie Fisher's Wishful Drinking.
“When the dust settles on the 20th century’s writers, it’s the genre authors who will be remembered,” she predicted, noting that The Lord of the Rings was voted most popular title of the century by readers, rather than most critically acclaimed. Raymond Chandler, Dashiell Hammett, and Dorothy Sayers were perhaps not taken seriously in their day but their popularity has lasted, Willis says. Great art, she suggests, gets made when no one's watching.
She is currently touring from her home in Colorado, although most appearances for her books are limited to the well-attended Science Fiction conferences held annually nationwide. She stopped by Third Place and autographed her books during a recent visit to Seattle.