Under the Cherry Tree 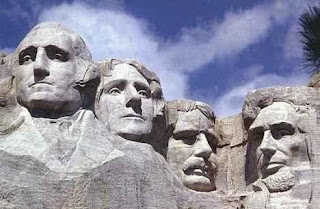 There have been a rash of holidays lately, and amidst all the hubbub we forgot to wish you a Happy President's Day!

Presidential biographies are often the giants of American nonfiction. Perhaps this is based on the American penchant for individual personalities and myth and of course the characters who have historically shaped our nation are large personalities indeed. Here are a few ideas for brushing up on your presidential knowledge:

Three recent biographies of Honest Abe that should intrigue Lincoln Lovers are Lincoln's Melancholy : How Depression Challenged a President and Fueled His Greatness by Joshua Wolf Shenk; Lincoln: The Biography of a Writer,by Fred Kaplan; and Lincoln on Race & Slavery edited by Henry Louis Gates, Jr.

Among the Pulitzer winning biographies are American Lion: Andrew Jackson in the White House, by Jon Meacham; and Sally Gordon-Reed's biography of Jefferson's other family, The Hemingses of Monticello: An American Family.

President Obama has been a popular author - if you haven't yet, get a hold of his Audacity of Hope, Dreams from my Father, and the Inaugural Address. There has also been a constant supply of new books on the Obama family, the administration, and the 2008 election season. One such book is John Heilemann and Mark Halperin's Game Change: Obama and the Clintons, McCain and Palin, and the Race of a Lifetime, which has been flying off the shelves at Third Place Books.