New Steampunk Hot Off the Press!

Fresh from that steamy, punky, future-past world, it's Cherie Priest's latest!  We've just received a small shipment of the new short novel of the Clockwork Century, Clementine.  Although it takes place in the same world as her tremendously popular, Nebula and Hugo Award nominee, Locus Award-winning, Boneshaker; it's not exactly a sequel.  Clementine is more of a tangential stand-alone story featuring Boneshaker alum and supporting cast member, Croggon Hainey.  Stolen airships and their pirate captains become entangled in the top-secret mission of a former confederate spy.  Gasp!  Whether you're looking for some summer fun or need something to satisfy your steampunk fix until the release of Priest's next novel, Dreadnought (September), this is the book for you.  And for you collectors, this is a relatively small print run from Subterranean Press.  Once they're gone, they're gone. 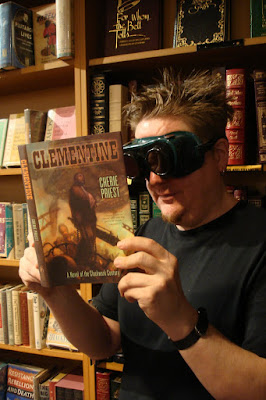