A Horse of Course 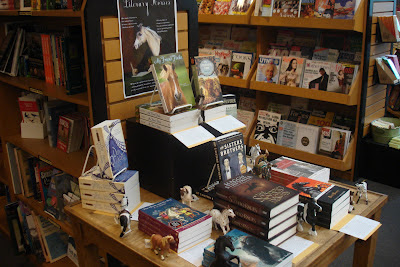 This month's small theme table has been put together by bookseller Annie, and she has decided to spotlight that ever patient, gentle, and loyal animal...the horse.

For most readers, favorite characters are as abundant as the books they reside in. They are as varied as the people who read about them. And some of them aren't always human. This month, Third Place Books is featuring a table devoted completely to the horse characters we love in literature. With good reason. So many characters that are loved in stories just happen to be from the animal kingdom. And often they shine the brightest. Where would Alec Ramsey be without The Black after he washed up on the island? And Gandalf wouldn't have been able to cross Middle Earth nearly as fast as he did on the back of Shadowfax. 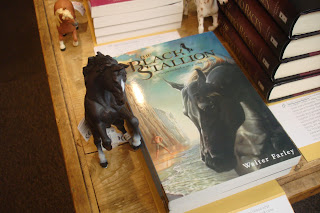 Of all animals, I find horses to be the most interesting. Not just because I've had a 15 year love affair with horses, but because they have such a capacity for love and friendship with humans. They trust us, and we trust them despite their size and ability to cause a lot of damage if they're scared or angry. They will learn if we give them the chance, and each and every horse I've ever known has been an individual with their own personality. Is it any wonder then that many books have amazing horses as central characters?

The wise and brave Artax, the star horse in The Neverending Story, protects his warrior friend Atreyu from danger, and guides him when Atreyu is lost. If only we could hear the wisdom of real horses so easily. And yet, Tom Booker teaches us how to listen properly as he helps Pilgrim recovery from a horrific accident in The Horse Whisperer. Eli Sister can't bring himself to get rid of his one-eyed horse Tub - who lost his eye in an altercation with a grizzly bear - during The Sisters Brothers. These are just a few examples of how horses continue to be a prevalent to our humanity. The books on the Horse Is My Co-Pilot table are just a few selections... who is your favorite horse in literature?

Annie has suggested several great books featuring noble and brave steeds.  Among them are:

Rocinante gains his name after his master, Alonso Quijano, develops delusions of grandeur and decides to go out into the world on a quest for his "lady love" and to prove his chivalry. Before, a simple farm horse, skinny and expected only to do the occasional bit of work, Rocinante suddenly finds himself carrying the grand Don Quioxte de la Mancha (the delusional Quijano) in full (old, rusty) armor to battle various giants (windmills) and evil knights (muleteers). What's a warhorse (stable nag?) to do?

The Two Towers, By JRR Tolkien


How could the second book in the Lord of the Rings trilogy not find its way onto a table geared to great horses in literature? It contains the greatest horse of them all! Full of dazzling, beautiful, intelligent horses, Shadowfax stands alone as the mightiest of the mearas. He refuses both saddle and bridle.He can traverse Middle Earth more quickly than any other horse. Theoden "gives" him to Gandalf to ride, but of course Shadowfax is the one who allows Gandalf to sit on his back. Such a horse does not let just anyone ride him. Charging fiercely into battle time and again, carrying Gandalf across Middle Earth on dangerous and urgent missions, Shadowfax stands alone among horses in beauty and intelligence.