This is another multiple bookseller recommendation with at least three of us singing its praises.  Actually, this book made it on to Robert's 2012 Top Ten List.  After reading what he had to say about it, I read it.  And after I read it and raved it, Ami picked it up. 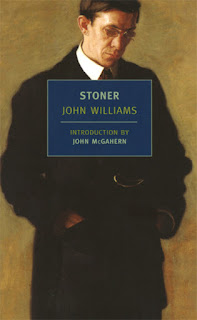 William Stoner is born at the end of the nineteenth century into a dirt-poor Missouri farming family. Sent to the state university to study agronomy, he instead falls in love with English literature and embraces a scholar’s life, so different from the hardscrabble existence he has known. And yet as the years pass, Stoner encounters a succession of disappointments: marriage into a “proper” family estranges him from his parents; his career is stymied; his wife and daughter turn coldly away from him; a transforming experience of new love ends under threat of scandal. Driven ever deeper within himself, Stoner rediscovers the stoic silence of his forebears and confronts an essential solitude.

John Williams’s luminous and deeply moving novel is a work of quiet perfection. William Stoner emerges from it not only as an archetypal American, but as an unlikely existential hero, standing, like a figure in a painting by Edward Hopper, in stark relief against an unforgiving world.

Here's what Ami has to say:

What makes Stoner so remarkable is how unremarkable it appears on the surface. The novel tells the life story of a man marked only, it seems, by his utter ordinariness. The only son of a farming family, William Stoner attends the University of Missouri intending to study agriculture but instead discovers a latent love of literature that leads him into a career in academia. The rest of his life is a series of thwarted chances at happiness interspersed with minor, fleeting triumphs. John Wiliams' straightforward yet delicate prose illuminates the life of this lonely professor whose purity and intelligence pit him against a bleak and baffling world.

I can't really explain what it is about this book. Yes, it's well written, filled with living, breathing characters, and perfectly paced. But it's more than that, and I don't have the talent to impress upon you just how beautiful it is. Read the blurbs, and other more eloquent reviewers. More importantly, read the book.

I have been meaning to get to this one for a while. Man, was it worth the wait. Such a deceptively simple, unassuming novel about a theoretically unremarkable life. William Stoner is the perfect American Everyman whose own expectations for his life are almost a surprise to himself. It is a life of modest goals and modest victories set amid a mountain of disappointments.

Wonderfully, however, while you may often feel bad for this anti-hero, you never really pity him. In the end it is an absolutely moving portrait of life, love, and work. Its a book that entirely deserves its rank of classic that the New York Review of Books has given it.

Seriously, how can you not want to Read This Book?
at 8:48 PM