Bargain books or remainders, no matter what you call them one thing stays the same...deals, Deals, DEALS! 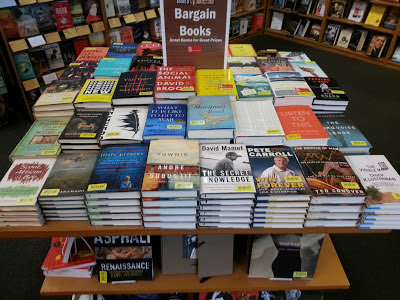 "What's a remainder?" you ask.  I actually found a Wikipedia article about them (which I find odd for some reason even though there's a Wikipedia entry for everything).  So you can read that, or I can just tell you.  Remainders are those books you'll find in both of our stores stacked on the "Bargain Books" tables, usually identifiable by the bright, yellow, price sticker on the front cover.

"But aren't those just used books?" you say.   No! Contrary to some customer opinion, those aren't used books.  Those are brand-spanking-new books!

"How are they so cheap?" you ask (you have a lot of questions today).  Well, remainder books are deeply discounted by the publisher, usually after the book has been released in paperback.  That's why most remainders are hardcovers.  Usually they are priced around $5.98, $6.98, or $7.98.  See, DEAL!

Eric is in charge of our remainders, and he says that right now he's got the best selection of nonfiction remainders that he's ever had.  Ever.  And the fiction isn't so bad either.  How's that for tempting?!  But you should know that once remainder books are gone, they're really gone (at least at that awesome price).  So you better hurry.

Here are a few of our current remainders: Feathers : The Evolution of a Natural Miracle by Thor Hanson What It Is Like to Go to War by Karl Marlantes Arcadia by Lauren Groff
at 4:16 PM