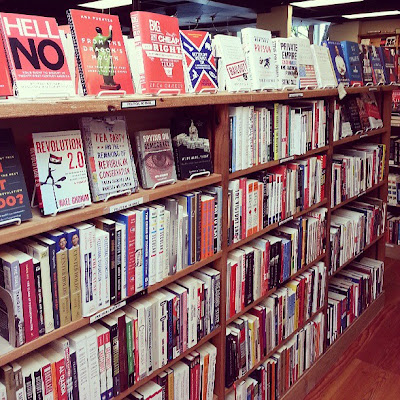 Look at how beautiful my Political Science section is! It's SO beautiful. Please note the patriotic red, white, and blue display. Now check out some of the more recent political science, law, and related humor titles. You'll learn a lot, laugh a little, and most likely find yourself bemoaning the current state of our political system. Enjoy! The Oath: The Obama White House and the Supreme Court
by Jeffrey Toobin

From the moment Chief Justice Roberts botched Barack Obama's oath of office, the relationship between the Court and the White House has been a fraught one. Grappling with issues as diverse as campaign finance, abortion, and the right to bear arms, the Roberts court has put itself squarely at the center of American political life. Jeffrey Toobin brilliantly portrays key personalities and cases and shows how the President was fatally slow to realize the importance of the judicial branch to his agenda. Combining incisive legal analysis with riveting insider details, The Oath is an essential guide to understanding the Supreme Court of our interesting times. Tim Russert is dead. But the room was alive. Big Ticket Washington Funerals can make such great networking opportunities. Power mourners keep stampeding down the red carpets of the Kennedy Center, handing out business cards, touching base. And there is no time to waste in a gold rush, even (or especially) at a solemn tribal event like this.

Washington—This Town—might be loathed from every corner of the nation, yet these are fun and busy days at this nexus of big politics, big money, big media, and big vanity. There are no Democrats and Republicans anymore in the nation’s capital, just millionaires. That is the grubby secret of the place in the twenty-first century. You will always have lunch in This Town again. No matter how many elections you lose, apologies you make, or scandals you endure.

In This Town, Mark Leibovich, chief national correspondent for The New York Times Magazine, presents a blistering, stunning—and often hysterically funny—examination of our ruling class’s incestuous “media industrial complex.” Through his eyes, we discover how the funeral for a beloved newsman becomes the social event of the year. How political reporters are fetishized for their ability to get their names into the predawn e-mail sent out by the city’s most powerful and puzzled-over journalist. How a disgraced Hill aide can overcome ignominy and maybe emerge with a more potent “brand” than many elected members of Congress. And how an administration bent on “changing Washington” can be sucked into the ways of This Town with the same ease with which Tea Party insurgents can, once elected, settle into it like a warm bath.

Outrageous, fascinating, and destined to win Leibovich a whole host of, er, new friends, This Town is must reading, whether you’re inside the Beltway—or just trying to get there. Me the People: One Man's Selfless Quest to Rewrite the Constitution of the United States of America
by Kevin Bleyer

You hold in your hands no mere book, but the most important document of our time. Its creator, Daily Show writer Kevin Bleyer, paid every price, bore every burden, and saved every receipt in his quest to assure the salvation of our nation’s founding charter. He flew to Greece, the birthplace of democracy. He bused to Philly, the home of independence. He went toe-to-toe (face-to-face) with Scalia. He added nightly confabs with James Madison to his daily consultations with Jon Stewart. He tracked down not one but two John Hancocks—to make his version twice as official. He even read the Constitution of the United States. So prepare yourselves, fellow patriots, for the most significant literary event of the twenty-first, twentieth, nineteenth, and latter part of the eighteenth centuries. Me the People won’t just form a More Perfect Union. It will save America. Praise for Me the People

“I would rather read a constitution written by Kevin Bleyer than by the sharpest minds in the country.”—Jon Stewart The Unwinding: An Inner History of the New America
by George Packer

A riveting examination of a nation in crisis, from one of the finest political journalists of our generation.

American democracy is beset by a sense of crisis. Seismic shifts during a single generation have created a country of winners and losers, allowing unprecedented freedom while rending the social contract, driving the political system to the verge of breakdown, and setting citizens adrift to find new paths forward. In The Unwinding, George Packer, author of The Assassins’ Gate: America in Iraq, tells the story of the United States over the past three decades in an utterly original way, with his characteristically sharp eye for detail and gift for weaving together complex narratives.

The Unwinding journeys through the lives of several Americans, including Dean Price, the son of tobacco farmers, who becomes an evangelist for a new economy in the rural South; Tammy Thomas, a factory worker in the Rust Belt trying to survive the collapse of her city; Jeff Connaughton, a Washington insider oscillating between political idealism and the lure of organized money; and Peter Thiel, a Silicon Valley billionaire who questions the Internet’s significance and arrives at a radical vision of the future. Packer interweaves these intimate stories with biographical sketches of the era’s leading public figures, from Newt Gingrich to Jay-Z, and collages made from newspaper headlines, advertising slogans, and song lyrics that capture the flow of events and their undercurrents.

The Unwinding portrays a superpower in danger of coming apart at the seams, its elites no longer elite, its institutions no longer working, its ordinary people left to improvise their own schemes for success and salvation. Packer’s novelistic and kaleidoscopic history of the new America is his most ambitious work to date.
at 5:30 PM