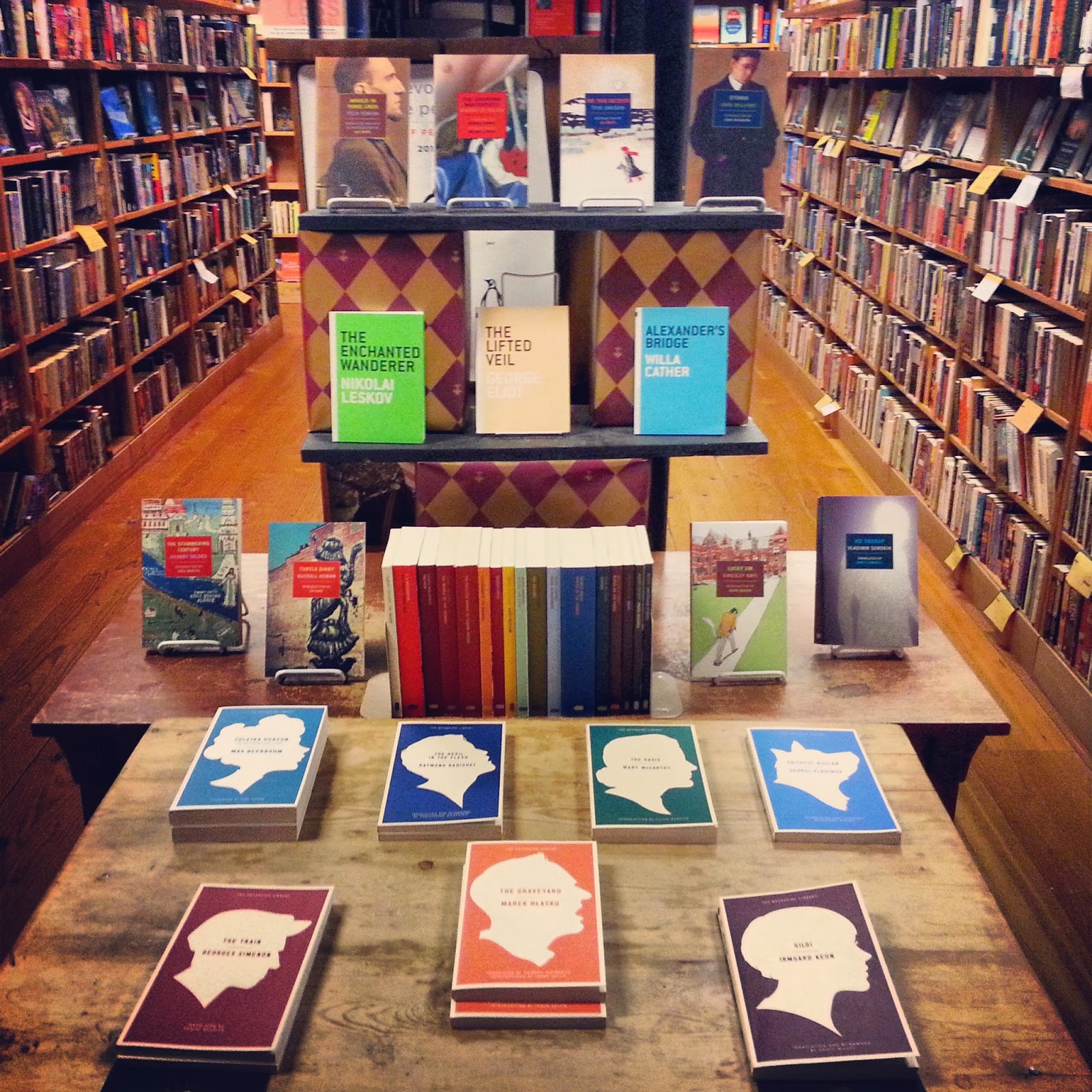 Whoever coined that tired, "cover-judging" cliche surely never saw an NYRB Classic from New York Review of Books. NYRB has done something remarkable with their covers.  They've made them all distinct and beautiful, but kept the basic format the same.  So it's incredibly easy to spot an NYRB, even though each cover is uniquely its own. The clean lines, bold colors, and stunning artwork make the NYRBs an object of beauty.  And it's more than just looks, there's something substantial; something that just feels good about holding an NYRB book.  Michael at Ravenna says that anyone designing a book should study the NYRB collection. He's right.

I've read quite a few NYRB books and I have loved a lot of them.  Stoner and The Summer Book come to mind.  But even if I haven't loved an NYRB, I've always enjoyed them- always found something worthwhile and important in reading them.  So I guess I will continue judging those NYRB covers, it hasn't failed me yet.

We've put up a little display at Ravenna featuring the genius of a well-designed collection of books.  Of course there's the NYRBs, but we're also loving Melville House's Neversink Library, and Art of the Novella collection.  Come judge them for yourself.

The Skin by Curzio Malaparte This is the first unexpurgated English edition of Curzio Malaparte’s legendary work The Skin. The book begins in 1943, with Allied forces cementing their grip on the devastated city of Naples. The sometime Fascist and ever-resourceful Curzio Malaparte is working with the Americans as a liaison officer. He looks after Colonel Jack Hamilton, “a Christian gentleman . . . an American in the noblest sense of the word,” who speaks French and cites the classics and holds his nose as the two men tour the squalid streets of a city in ruins where liberation is only another word for desperation. Veterans of the disbanded Italian army beg for work. A rare specimen from the city’s famous aquarium is served up at a ceremonial dinner for high Allied officers. Prostitution is rampant. The smell of death is everywhere.

Subtle, cynical, evasive, manipulative, unnerving, always astonishing, Malaparte is a supreme artist of the unreliable, both the product and the prophet of a world gone rotten to the core.

Zuleika Dobson: Or, an Oxford Love Story by Max Beerbohm Sir Henry Maximilian “Max” Beerbohm was, like his friend Oscar Wilde, such an acclaimed wit (and essayist, caricaturist, and parodist) that George Bernard Shaw dubbed him “the incomparable Max.” But Beerbohm’s comic masterpiece Zuleika Dobson—one of the Modern Library’s top 100 English-language novels of the twentieth century—is the only novel he ever wrote.

Strangely out of print in the United States for years, this crackling farce is nonetheless as piercing and fresh as when it first appeared in 1911: a hilarious dismantling of academia and privilege, and a swashbuckling lampooning of class systems and notions of masculine virtue.

The all-male campus of Oxford—Beerbohm’s alma mater—is a place where aesthetics holds sway above all else, and where witty intellectuals reign. Things haven’t changed for its privileged student body for years . . . until the beguiling music-hall prestidigitator Zuleika Dobson shows up.

The book’s marvelous prose dances along the line between reality and the absurd as students and dons alike fall at Zuleika’s feet, and she cuts a wide swath across the campus—until she encounters one young aristocrat for whom she is astonished to find she has feelings.

As Zuleika, and her creator, zero in on their targets, the book takes some surprising and dark twists on its way to a truly startling ending—an ending so striking that readers will understand why Virginia Woolf said that “Mr. Beerbohm in his way is perfect.”