The new releases out tomorrow compliment Ravenna's orange window display perfectly.  How thoughtful of the publishers. 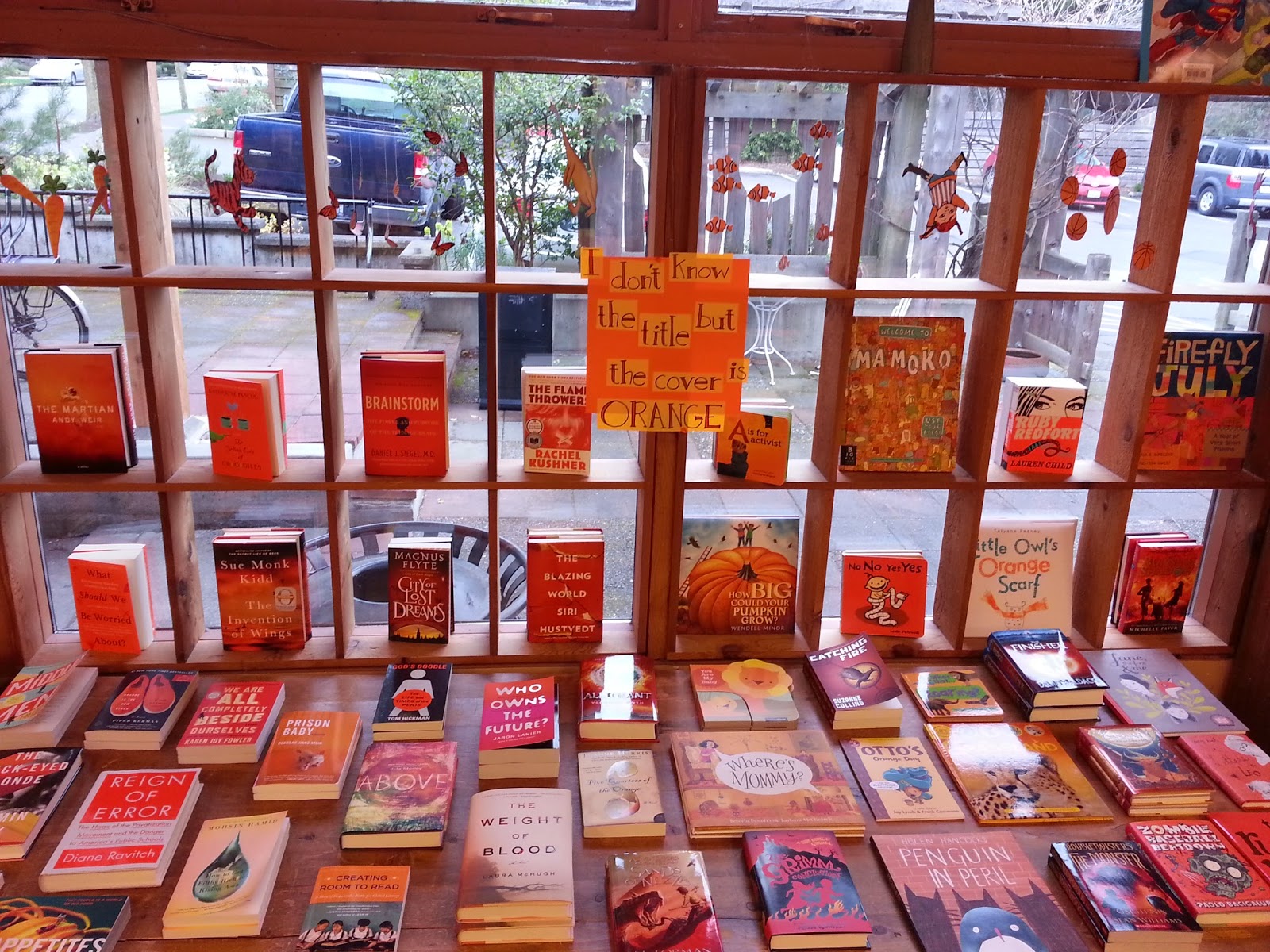 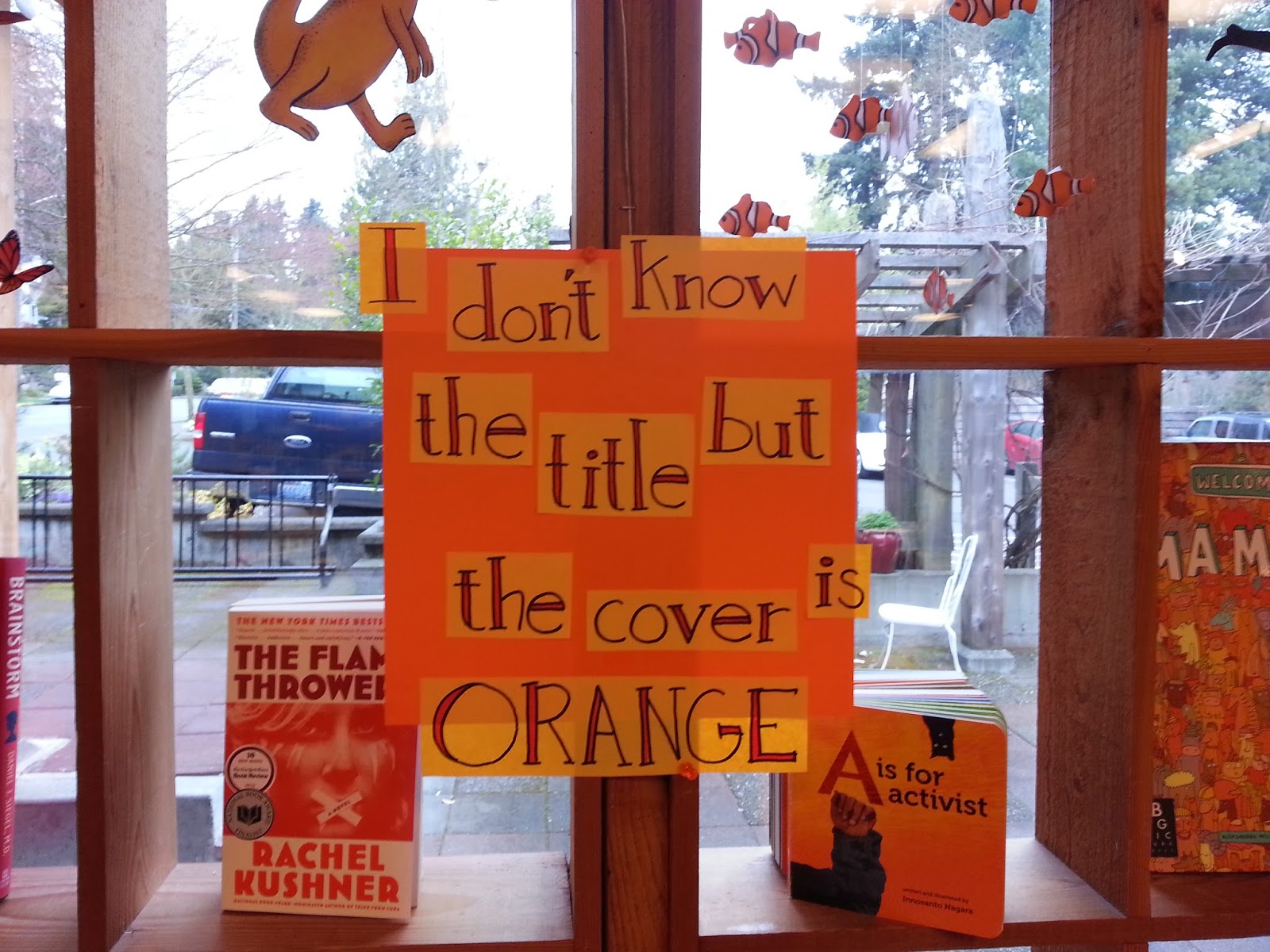 Falling Out of Time  by David Grossman

In Falling Out of Time, David Grossman has created a genre-defying drama––part play, part prose, pure poetry––to tell the story of bereaved parents setting out to reach their lost children. It begins in a small village, in a kitchen, where a man announces to his wife that he is leaving, embarking on a journey in search of their dead son. The man––called simply Walking Man––paces in ever-widening circles around the town. One after another, all manner of townsfolk fall into step with him (the Net-Mender, the Midwife, the Elderly Math Teacher, even the Duke), each enduring his or her own loss. The walkers raise questions of grief and bereavement: Can death be overcome by an intensity of speech or memory? Is it possible, even for a fleeting moment, to call to the dead and free them from their death? Grossman’s answer to such questions is a hymn to these characters, who ultimately find solace and hope in their communal act of breaching death’s hermetic separateness. For the reader, the solace is in their clamorous vitality, and in the gift of Grossman’s storytelling––a realm where loss is not merely an absence but a life force of its own. Every Day is for the Thief by Teju Cole

A young Nigerian living in New York City goes home to Lagos for a short visit, finding a city both familiar and strange. In a city dense with story, the unnamed narrator moves through a mosaic of life, hoping to find inspiration for his own. He witnesses the “yahoo yahoo” diligently perpetrating email frauds from an Internet café, longs after a mysterious woman reading on a public bus who disembarks and disappears into a bookless crowd, and recalls the tragic fate of an eleven-year-old boy accused of stealing at a local market.

Along the way, the man reconnects with old friends, a former girlfriend, and extended family, taps into the energies of Lagos life—creative, malevolent, ambiguous—and slowly begins to reconcile the profound changes that have taken place in his country and the truth about himself.

In spare, precise prose that sees humanity everywhere, interwoven with original photos by the author, Every Day Is for the Thief—originally published in Nigeria in 2007—is a wholly original work of fiction. This revised and updated edition is the first version of this unique book to be made available outside Africa. You’ve never read a book like Every Day Is for the Thief because no one writes like Teju Cole. In a Europe without borders, where social norms have become fragile, a son must confront the sins of his father and grandfather, and invent new strategies for survival.

A young boy grows up with a loving father who has little respect for the law. They are always on the run, and as they move from place to place, the boy is often distraught to leave behind new friendships. Because it would be dicey for him to go to school, his anarchistic father gives him an unconventional education intended to contradict as much as possible the teachings of his own father, a preacher and a pervert. Ten years later, when the boy is entering adulthood, with a fake name and a monotonous job, he tries to conform to the demands of ordinary life, but the lessons of the past thwart his efforts, and questions about his father’s childhood cannot be left unanswered.

Spanning the mid-1980s to early-twenty-first-century in Copenhagen, this coming-of-age novel examines what it means to be a stranger in the modern world, and how, for better or for worse, a father’s legacy is never passed on in any predictable fashion.

And new in paperback: The Interestings by Meg Wolitzer

The summer that Nixon resigns, six teenagers at a summer camp for the arts become inseparable. Decades later the bond remains powerful, but so much else has changed. In The Interestings, Wolitzer follows these characters from the height of youth through middle age, as their talents, fortunes, and degrees of satisfaction diverge.

The kind of creativity that is rewarded at age fifteen is not always enough to propel someone through life at age thirty; not everyone can sustain, in adulthood, what seemed so special in adolescence. Jules Jacobson, an aspiring comic actress, eventually resigns herself to a more practical occupation and lifestyle. Her friend Jonah, a gifted musician, stops playing the guitar and becomes an engineer. But Ethan and Ash, Jules’s now-married best friends, become shockingly successful—true to their initial artistic dreams, with the wealth and access that allow those dreams to keep expanding. The friendships endure and even prosper, but also underscore the differences in their fates, in what their talents have become and the shapes their lives have taken.

Wide in scope, ambitious, and populated by complex characters who come together and apart in a changing New York City, The Interestings explores the meaning of talent; the nature of envy; the roles of class, art, money, and power; and how all of it can shift and tilt precipitously over the course of a friendship and a life.
at 8:24 PM