Working at a bookstore for as long as I have, there are certain rules I enforce upon myself. Without these rules I might not have enough money for food or shelter, but would have a truly spectacular library. So, for the most part I only allow myself to buy used books. And even then, those purchases are typically made using store credit. It's one of the serious benefits of working at a new and used bookstore.

Occasionally, a favorite author will have a new book out, or there's some awesome NYRB title that I HAVE to have, and I just cannot track down a used copy. That's when I really have to up my trade-in game. But there's something beautiful and satisfying about that too. My inner simple-living-master revels in trading in five old books for one, beautiful, new, truly desired book.

But then there are other times. Times when a new book by a first-time author or someone I've never read before arrives in the store. And I am inexplicably, magnetically drawn to it. Sometimes, it's the cover that grabs me, a review in the paper, or perhaps an errant remark made by someone who has read it. Oddly, it's usually only big, fat, brand new hardcovers. Whatever it is, I need to have that book. Immediately. So I buy it. With money.

This happens to me about once a year, maybe twice. The first time was in 2001, I was working at a bookstore in Tucson, Arizona, and A.L Kennedy's book Everything You Need appeared. And I NEEDED it. So, I splurged, and now she's one of my favorite authors. It just happened again yesterday with Hanya Yanagihara's new novel, A Little Life. And yes, I bought it.

I never feel guilty when I splurge like this and I always enjoy these books, even if they don't turn out to be favorites. It's something about the small kindness I have paid myself that gives me a feeling of warmth every time I pick it up.

Perhaps the success of that very first lapse in will power is what let's me continue with this small indulgence. Or maybe it's something a little deeper. When this very phenomenon happened with Lev Grossman's first book in the Magicians series, I was trying to explain it to a friend. And she remarked that sometimes, constantly being thrifty can make a person feel shriveled, and that maybe it is these occasional moments of generosity toward ourselves that allow us to be generous toward others. As much as that sounds like convenient justification, I think I believe it. 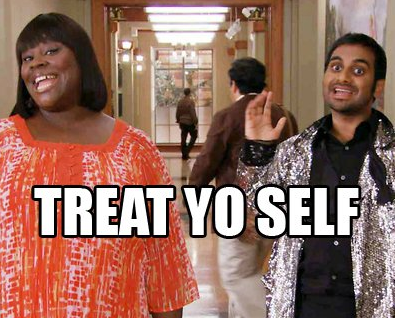