What Are You Reading Now? Featuring Helen Simonson 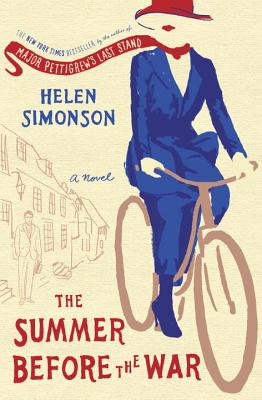 The release of Helen Simonson’s first novel since Major Pettigrew's Last Stand is perfectly timed. Just as America’s dramatic obsession with Britain’s World War I-era idiosyncrasies is left behind by the finale of Downton Abby, we get The Summer Before the War to put us right back in the English countryside.

The Summer Before the War takes place, literally, the summer before World War I breaks out in 1914. But in Sussex, where the small towns and hamlets seem so removed from the violence of the Ottoman Empire, the most controversial thing to happen is the arrival of a young, attractive, female Latin teacher.

Coming off the heels of Simonson’s first triumph with Major Pettigrew, as well as its reminiscence of Downton’s characters and imagery, Simonson’s new novel is already receiving high praise.

In preparation for her appearance at our Lake Forest Park store on March 30th, we asked her what she’s been reading now that her novel’s hitting shelves. It’s a new series we’re going to feature on the blog and in our newsletter, but we thought Simonson would be the right author to start things off.

Maybe it's possible to find new pockets of time for reading?  I've just discovered that on a plane I can read a real book all through take off, landing and that endless waiting on runways for the ground crew to get back from lunch and open the gate. And what am I missing - mindless TV or the humiliation of snoring in the middle seat?  Among the high-flying books I've read?  Try The Swans of Fifth Avenue by Melanie Benjamin, a fascinating portrait of betrayal for Truman Capote fans. I've read and re-read My Name is Lucy Barton by Elizabeth Strout (just nominated for the Bailey's Prize) because it's a master class in creating a unique voice.  And I've been lucky enough to read advance copies of Everyone Brave is Forgiven, by Chris Cleave (coming May) and Homegoing by Yaa Gyasi (coming June).  The former is a gripping World War II story of love and duty set in London and the siege of Malta and the latter is a stunning debut exploring the history of slavery in Ghana and tracing many generations; including those who remained and those who were shipped as slaves to America.  With books as good as these, my new reading habit just might stick!

Please join us on Wednesday, March 30th at 7:00PM, for Helen Simonson in conversation with local fave, Jennie Shortridge.
at 1:45 PM

Labels: Author Interviews, Author Visits, Events, What Are You Reading Now?
Email ThisBlogThis!Share to TwitterShare to FacebookShare to Pinterest