I tried to write this as all one post, but it really got away from me. There is just WAY too much Shakespeare stuff I need to tell you about. So I'm breaking it down. Here it is, ACT I of me talking to you about Shakespeare related things.
***
I hesitate to say that all of our reading here at Third Place is influenced by Canadian Television; I don't want to over-generalize. But this is the second post in almost as many months to feature TV from north of the 49th Parallel. 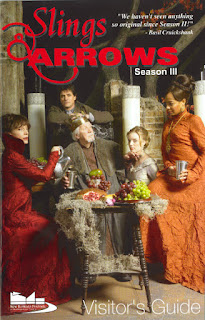 Recently, I devoured all three seasons of Slings and Arrows. It's roughly 13.5 hours of near-perfection, all about a Canadian Shakespeare theater festival. Each season focuses on a separate play, really diving into it, and though the show is more focused on the relationships between the actors and employees, there are a lot of moments of beautifully acted Shakespeare. Plus it has loads of little inside jokes, and a ghost. It's smart, funny, and sweet and I really, really recommend it.

I will admit that I started watching this show, not because of my love for Shakespeare, but because of my love for the lead actor (he's soooooo cute). But there was a brief period in college when I would go to the drama department productions of overdone, usually modern-dress, very Rent-like Shakespeare plays. I loved being "into Shakespeare." I felt very artsy. But then I grew up and cared less about what people thought about the things I liked, and decided, my being "into" Shakespeare was really more for show. I didn't really get it. Shakespeare just seemed so obvious and the stories sort of unoriginal. Any comic relief in the plays was always juvenile and unfunny. And every other soliloquy riddled with cliches.

And then I started watching this ridiculous (awesome) Canadian television show. And sure, they cherry pick the most beautiful passages to present, but still it reignited my interest and though this makes me sound rather dense and obvious myself, I realized Shakespeare's stories and plots seem obvious because his writing has influenced so much of our culture. He's seeped into every last form of media. Of course he's going to seem unoriginal when we've spent all our lives consuming reincarnations and cheap knock-offs of his genius. Sometimes the comic relief feel so inane because the tragedy is so heartbreaking, that humor, any humor will inevitably fall flat. And all those cliches in every other soliloquy? Well, they weren't cliches when he wrote them. They became cliches because he wrote them. We've just been repeating them ever since.

You must watch this show. But be warned, you may find yourself reciting Shakespeare to your cats. Here's a little taste of those Canadian wizards at work:

Labels: Books on TV, Shakespeare
Email ThisBlogThis!Share to TwitterShare to FacebookShare to Pinterest