I Think You Forgot Something : Macdonald Harris

I once worked with a young Harvard graduate, summa cum laude, the whole bit. On paper, she looked like the ideal person with whom to discuss literature: well-educated, great taste, interests best described as widely flung. But in reality, you could have more stimulating conversations about books with a drug-addled dik-dik. The most elaborate praise available from her was “it was good,” or “I liked it.” Sometimes, that little nudge can be enough to sway me; maybe I’m curious about a book or an author but for whatever reason don’t trust myself and the plaudits of another, no matter how mild, can bring my wallet into the light. But not often.

Most booksellers spend forty odd hours on the clock surrounded by unread and unfamiliar books and another 128 off the clock also surrounded by more unread and only slightly more familiar tomes. In our reading, it is the bookseller's curse that we are reading either six months ahead or ten years behind everyone else. Most booksellers find the traditional nightstand replaced by stacks of books, both the old and forgotten as well as the coveted not-yet-released. Over time, it can become difficult to entertain suggestions because those stacks, that daunting, swollen mass just cannot possibly bear another ounce. 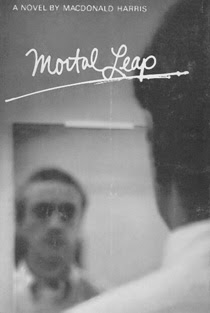 Years ago, however, a novel came to my attention through a librarian pal whose recommendation was so fulsome, so bombastically positive, I had no choice but to heed it. Both title and author were unknown to me and the journey to reading it proved to be quite the undertaking. Published in 1964, Mortal Leap by Macdonald Harris went out of print almost immediately and it is impossible to find a decent copy for less than a cool six hundred dollars. It became my personal holy grail, the damn thing’s elusiveness creating an almost feral desire. I suggested it to the New York Review of Books for reprint multiple times, even creating an alias to submit multiple suggestions. I checked used book sites daily for a decent copy under three hundred dollars, the most I can conceive of paying for anything that doesn’t come with a roof or a motor.

Eventually I disavowed myself of the notion I could own a copy and, with a five dollar bill and the willingness of the good librarians of Issaquah, settled in with a brittle, near ruined copy of the book that had felt like nothing but pure myth for years. Lo and behold, it was worth every moment of the hunt, every failed footstep of the pursuit forgotten. Mortal Leap is a book so far beyond “good” that its greatness can only be experienced. 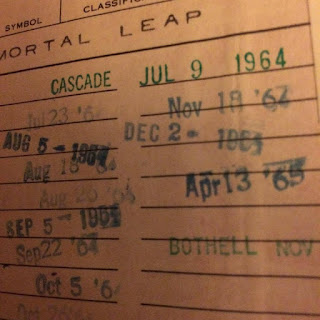 This is fiction writing at its finest: a story in the classical mode, lushly wrought with details that immediately establish a fully realized character and landscape. Harris reawakens a childlike sense of wonder and fascination, a passion for the possible that transports the reader fully. His gift is truly a marvel, an ability to craft stories that are so fantastic and immersive it borders on the terrifying. The relationship between the reader and the physical object is marvelously indescribable and only a true, ethereal talent can to make a pound of paper feel alive in your hands.

If you peruse the synopses of Harris’s other work, you can immediately see no two are alike. It is a motley collection of novels and is only unified by, other than its greatness, man’s elusive inability to know himself. If you’ve read five novels by white men, at least four addressed this moral mission. Yawn, yawn, yawn, right? Not here.


Mortal Leap is a quintessential, exemplary model of what fiction can and should do. In the most reductive terms, it is an adult's adventure tale, a la Jack London: affect-less Mormon boy, disinterested in the life laid out before him, follows his existential malaise to sea. There is a plot outside of little boy lost, but the book is so beautifully written and such a singular experience, I would be doing it an enormous disservice dressing it in the rags of my fumbling fanboydom. But if you need convincing, the book speaks for itself beautifully:

It was a part of myself that was my enemy; I still had a childish illusion that the flesh on my own bones was somehow unique and precious to the universe, in some obscure corner of my mind I wanted the others to love me and make exceptions for me simply because I felt heat and cold, pain and loneliness as they did. Now this was gone once and for all, and I understood there were no exceptions and on one was invulnerable, we all had to share the same conditions and in the end this was simply mortality, the mortality of things as well as ourselves. After that I didn't expect anybody to love me...

And a passage that should make any reader weak-kneed:

The books were a private part of me that I carried inside and guarded and didn't talk to anybody about; as long as I had the books I could convince myself I was different from the others and my life wasn't quite as stupid and pointless. 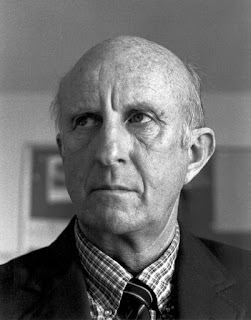 Harris's is a body of work I only become more passionate about, both as I explore titles I haven’t read or mull over the handful that I have. Looking at the novels on the whole, comparisons are most easily made to the work of Paul Auster. Harris’s novels carry the same ruminative tone and irreverent sense of adventure and both boldly wear an ambition to stretch their craft and sense of reality. Also like Auster, there’s no impression Harris was hankering for clout or accolades but simply a love of a pure, simple form of storytelling.


None of this is as succinct a recommendation as “it’s good,” I know. But so remarkable is Macdonald Harris, so deserving of full-volume, roof-shaking praise, his work could turn even my plaintively praising former colleague into an ivory tower of babble.

Labels: dik-dik, I Think You Forgot Something, Macdonald Harris, out of print, Staff Reviews, Suggested Reads
Email ThisBlogThis!Share to TwitterShare to FacebookShare to Pinterest