One More Reason to Read It 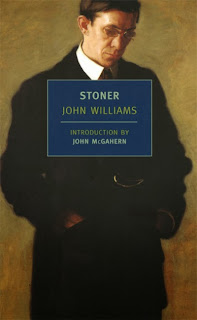 We've been raving about Stoner by John Williams for a year now.  Ami loved it.  Robert chose it as one of his top ten books for 2012.  I read it at the beginning of the year and it will definitely be making an appearance on my top ten list for 2013.  Here's what we had to say about it back in February.

Now, British book retail giant Waterstone's has chosen the novel as their book of the year.  It's currently their number two fiction bestseller.

Stoner went out of print just one year after its original 1965 publication, and wasn't brought back until New York Review of Books dusted it off and re-released it.  Even that NYRB edition came out in 2006, seven years ago.  So why now?  Why the sudden groundswell for this long-forgotten book?  Maybe some of it has to do with passionate booksellers.  Perhaps it just takes seven years for word of mouth to work its magic.  Or maybe such a lovely, near-perfect novel, was always going to make its mark...it was just a matter of when.

Here's a great article on the Stoner phenomenon from the Globe and Mail.  And after you're done reading that, read Stoner.  Really, you won't regret it.
at 3:36 PM