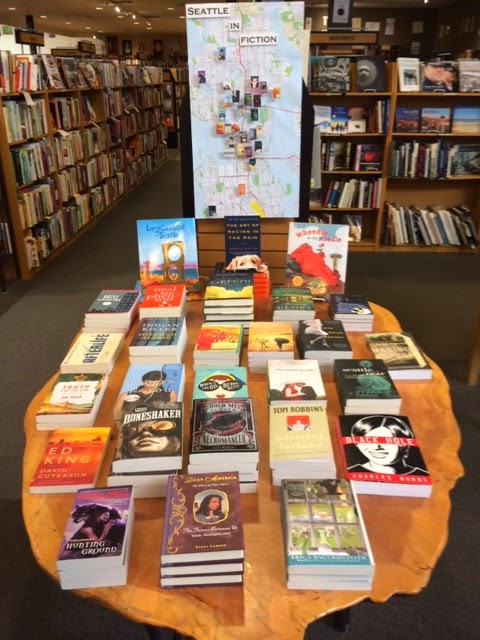 If you haven't been to the Lake Forest Park store this month, you haven't seen our beautiful new displays.  On the Tree Table, we're featuring books set in Seattle. You might be surprised at just how many books take place here.  Very fun.  Here are just a few of the books you'll find on the table.  Pick one up today and read about your city!

The setting: suburban Seattle, the mid-1970s. We learn from the outset that a strange plague has descended upon the area’s teenagers, transmitted by sexual contact. The disease is manifested in any number of ways — from the hideously grotesque to the subtle (and concealable) — but once you’ve got it, that’s it. There’s no turning back.

As we inhabit the heads of several key characters — some kids who have it, some who don’t, some who are about to get it — what unfolds isn’t the expected battle to fight the plague, or bring heightened awareness to it , or even to treat it. What we become witness to instead is a fascinating and eerie portrait of the nature of high school alienation itself — the savagery, the cruelty, the relentless anxiety and ennui, the longing for escape.

And then the murders start.

As hypnotically beautiful as it is horrifying, Black Hole transcends its genre by deftly exploring a specific American cultural moment in flux and the kids who are caught in it- back when it wasn’t exactly cool to be a hippie anymore, but Bowie was still just a little too weird. To say nothing of sprouting horns and molting your skin…

Dr. Charlotte Reese works in the intensive care unit of
Seattle's Beacon Hospital, tending to patients with the most life-threatening illnesses and injuries. Her job is to battle death--to monitor erratic heartbeats, worry over low oxygen levels, defend against infection and demise.

One night a Jane Doe is transferred to her care from a rural hospital on the Olympic Peninsula. This unidentified patient remains unconscious, the victim of a hit and run. As Charlotte and her team struggle to stabilize her, the police search for the driver who fled the scene.

As Charlotte finds herself making increasingly complicated medical decisions that will tie her forever to Jane's fate, her usual professional distance evaporates. She's plagued by questions: Who is Jane Doe? Why will no one claim her? Who should decide her fate if she doesn't regain consciousness--and when? Perhaps most troubling, Charlotte wonders if a life locked in a coma is a life worth living.

Enlisting the help of her boyfriend, Eric, a science journalist, Charlotte impulsively sets out to uncover Jane Doe's past. But the closer they get to the truth, the more their relationship is put to the test. It is only when they open their hearts to their own feelings toward each other--and toward life itself--that Charlotte and Eric will unlock Jane Doe's shocking secret, and prepare themselves for a miracle. Filled with intricate medical detail and set in the breathtaking Pacific Northwest, Gemini is a riveting and heartbreaking novel of moral complexity and emotional depth. Larry Get Lost in Seattle by John Skewes

Larry Gets Lost in Seattle is an interactive, highly visual children’s story about a young boy (Pete) who goes to Seattle with his family and is temporarily separated from his cute little dog, Larry, while sightseeing. In his search for Pete, Larry encounters many Seattle landmarks and cultural attractions before the two are reunited. 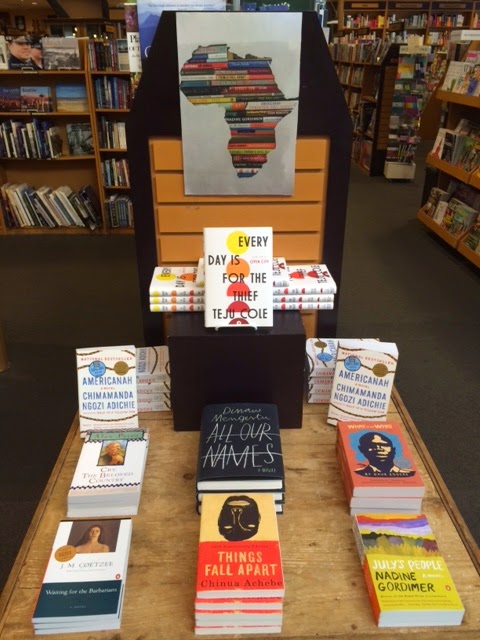 This month, the Small Table is dedicated to authors from Africa.  It's a big continent, and there are a lot of great authors, too many to fit on this little table.  Take a look at this gorgeous poster for many more. 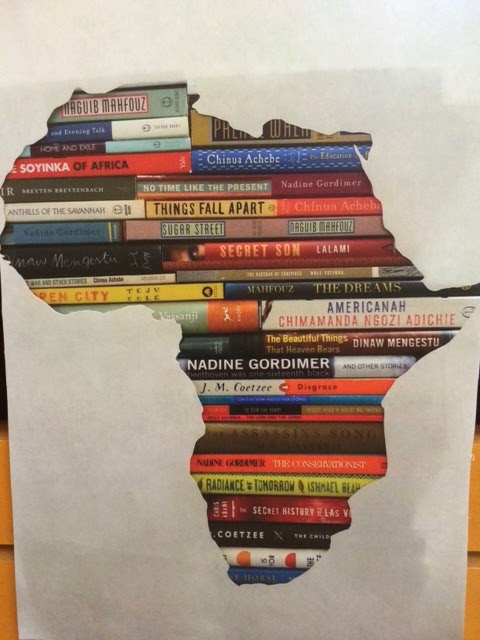 All Our Names by Dinaw Mengestu

From acclaimed author Dinaw Mengestu, comes an unforgettable love story about a searing affair between an American woman and an African man in 1970s America and an unflinching novel about the fragmentation of lives that straddle countries and histories.

All Our Names is the story of two young men who come of age during an African revolution, drawn from the safe confines of the university campus into the intensifying clamor of the streets outside. But as the line between idealism and violence becomes increasingly blurred, the friends are driven apart—one into the deepest peril, as the movement gathers inexorable force, and the other into the safety of exile in the American Midwest. There, pretending to be an exchange student, he falls in love with a social worker and settles into small-town life. Yet this idyll is inescapably darkened by the secrets of his past: the acts he committed and the work he left unfinished. Most of all, he is haunted by the beloved friend he left behind, the charismatic leader who first guided him to revolution and then sacrificed everything to ensure his freedom.

Elegiac, blazing with insights about the physical and emotional geographies that circumscribe our lives, All Our Names is a marvel of vision and tonal command. Writing within the grand tradition of Naipul, Greene, and Achebe, Mengestu gives us a political novel that is also a transfixing portrait of love and grace, of self-determination and the names we are given and the names we earn.

One of The New York Times's Ten Best Books of the Year and an NBCC Award Finalist An NPR "Great Reads" Book, a Chicago Tribune Best Book, a Washington Post Notable Book, a Seattle Times Best Book, an Entertainment Weekly Top Fiction Book, a Newsday Top 10 Book, and a Goodreads Best of the Year pick.

A powerful, tender story of race and identity by Chimamanda Ngozi Adichie, the award-winning author of Half of a Yellow Sun.

Ifemelu and Obinze are young and in love when they depart military-ruled Nigeria for the West. Beautiful, self-assured Ifemelu heads for America, where despite her academic success, she is forced to grapple with what it means to be black for the first time. Quiet, thoughtful Obinze had hoped to join her, but with post-9/11 America closed to him, he instead plunges into a dangerous, undocumented life in London. Fifteen years later, they reunite in a newly democratic Nigeria, and reignite their passion—for each other and for their homeland.
at 2:23 PM