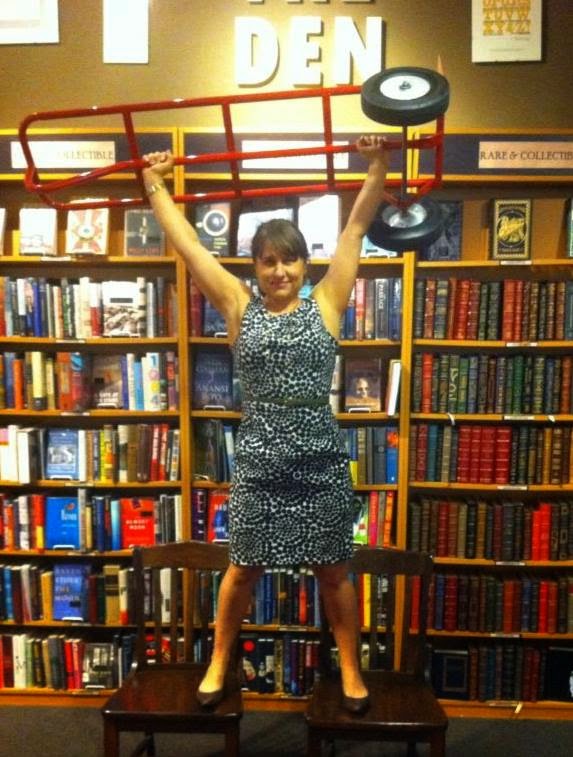 Wendy has been with Third Place, in her words, "since before the dawn of time." Or 16 years.  You'll find Wendy out at Lake Forest Park working hard coordinating all the great events at both locations and buying all those adorable sidelines and gifts.  She's into Crossfit, really, really into it.  And she's got two adorable chihuahuas named Mimi and Harriet.  She was once obsessed with Elvis Presley...but who hasn't been?


"I was obsessed with Elvis Presley my 8th grade year, only listened to Elvis music and only watched Elvis movies, documentaries and made for TV movies. I used to have a gold poofy cover Elvis book that cost $30 (a ton of dough at the time) that I kept in my locker and would only let my friends look at it if they washed their hands. I miss that book."

How long have you been a bookseller? I got my first job as a bookseller in Everett Washington at a small store called Port Gardner Bay books when I was 21...so that long.

What's your favorite section in the store? Fiction. What book do you recommend most? The one I have a chance at selling is Confederacy of Dunces, you're a dunce if you haven't read it. The one I WISH I could sell more of, The Ice Trilogy.

Favorite bookstore, besides Third Place?  I really like Elliot Bay's new digs. And there was a super cute store in Palmer, AK that I loved (editor's note: I think she means this one).

What are you reading now? Uhhhh...textbooks and really poorly scanned pages from books provided by my professors. I'm in school.

Can you read more than one book at a time? Yes, but only fluff books.

Do you have to finish a book once you've started, or do you give up on books? I give a book 30-50 pages, if it hasn't grabbed me I let it go. There are waaay too many books I'm NOT reading to spend more time with a book I don't like.

A book you regret not reading sooner or a book you regret never having read. There are a lot, in high school my English teacher ONLY assigned Steinbeck...and maybe a little Shakespeare. I love Steinbeck, don't get me wrong...but I wasn't introduced to the broader world of literature until I started working at bookstores. I really wish someone would have introduced me to Daniil Kharms, Joan Didion and Balzac.

Do you have an all-time favorite book? Count of Monte Cristo AND The Confederacy of Dunces

Do you keep books? I only keep 50 books in my house, if I start to get over the limit, I purge. I DO have multiple copies of The Confederacy of Dunces and Daniil Kharm's book Today I Wrote Nothing, to give away.  Borrow them? No. Lend them? I give books away, I don't want them back...see 50 book rule.

How are your bookshelves arranged at home? Size.

Do you judge books by their covers? Yes, of course.

Favorite book as a kid. Little Women, I still have my original copy!

Have you read Ulysses? No, and I won't. The Day of the Triffids by John Wyndham

In 1951 John Wyndham published his novel The Day of the Triffids to moderate acclaim. Fifty-two years later, this horrifying story is a science fiction classic, touted by The Times (London) as having “all the reality of a vividly realized nightmare.”

Bill Masen, bandages over his wounded eyes, misses the most spectacular meteorite shower England has ever seen. Removing his bandages the next morning, he finds masses of sightless people wandering the city. He soon meets Josella, another lucky person who has retained her sight, and together they leave the city, aware that the safe, familiar world they knew a mere twenty-four hours before is gone forever.

But to survive in this post-apocalyptic world, one must survive the Triffids, strange plants that years before began appearing all over the world. The Triffids can grow to over seven feet tall, pull their roots from the ground to walk, and kill a man with one quick lash of their poisonous stingers. With society in shambles, they are now poised to prey on humankind. Wyndham chillingly anticipates bio-warfare and mass destruction, fifty years before their realization, in this prescient account of Cold War paranoia.
at 3:07 PM