New Arrivals : It's a Book!

Wires and Nerve by Marissa Meyer, illustrated by Douglas Holgate

Like many people, I devoured the Lunar Chronicles series. They had me at “cyborg Cinderella” I’M NOT MADE OF STONE, PEOPLE.  It was a fun series with adventure, humor, and the kind of friendships we all hope for. So I was really excited to find out that Marissa Meyer was writing a comic book spinoff of the series. Wires and Nerve follows the exploits of Iko as she goes after the rogue wolf soldiers left on Earth. Excited, yes, but also a little nervous. I’m picky about my comic books—if I don’t love the art, it doesn’t matter if the story is great. And if the art is wonderful but the story is flat? I’m putting the book down. Not every novelist can manage the crossover into another form, either. Finally, there’s always the concern that a side character won’t have enough narrative oomph to carry a story on their own.
because 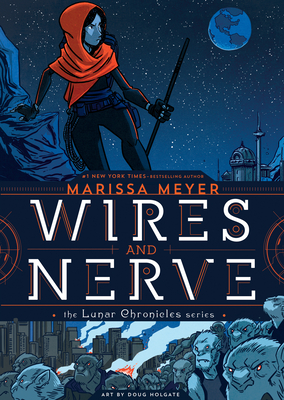 I managed to get my grubby little paws on an early copy of Wires and Nerve, and let me tell you, friends, you can breathe a sigh of relief. If you loved the original series, you’ll love the comic book. Meyer has used this opportunity to not only deliver Iko as her usual, charming self, but also to give us a more in-depth look into the problems of being an android. As much as Cinder faced prejudice for being a cyborg, Iko is constantly being dismissed as a non-entity—a frustration she handles with humor and wit, but a frustration nonetheless.

All of the other characters from the book are present, too. After all, things don’t wrap up with an easy, “And they lived happily ever after” at the end of the novels. Rebuilding takes work and time, and in the comic we get a glimpse of the characters getting on with the necessary business of starting over.

Let’s talk about the art. Wires & Nerve is done in various blues, blacks, and grays and usually I prefer my comics in full color. I thought the scheme worked for this book, though, what with the general setting being in ships, space, and the Lunar settlement. Doug Holgate’s drawings are charming and whimsical and I thought an excellent fit for the story.

Basically, if you liked the books, you need to get your mitts on the comic. Don’t usually read comics? This is a good place to start! Haven’t read the Lunar Chronicles? Well, you can read the comic without having read the series, but you will get a ton of spoilers for the books. So maybe you should just read all of the books. You won’t regret it. I mean, if cyborg Cinderella didn’t sway you, I’m not sure you can be reasoned with. Wolf soldiers? Dashing starship captains? Evil queens? Feisty androids that fight human prejudice as well as genetically engineered killing machines? I don’t know about you guys, but for me that translates into shut up and take my money.
at 1:24 PM