The Art of Independent Bookstore Day 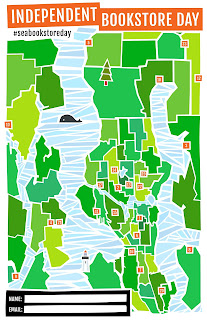 Independent Bookstore Day is just around the corner (Saturday, April 29th!) and we've been busily preparing for all the fun. But Third Place's own in-house graphic designer, Stephen Crowe, has been extra busy with some special Seattle-specific Indie Bookstore Day projects. He's designing this year's Seattle Independent Bookstore Day Challenge Map, and he's also working on a lovely Insignia Print that will feature all of Seattle's favorite bookstores.

And read on for our interview with the artist!

What is your art background?

I graduated in English, but the year after my graduation I started a project to illustrate every page of by Finnegan's Wake James Joyce. Needless to say, I never finished, but I developed a small following of passionate nerds on the Internet, and in 2014 I was commissioned by a (very very very) small press to illustrate a new edition of Dubliners. After that, I started to focus more on comics, especially an ongoing story called The City that I make with my wife, Melanie Amaral.

How did you come to work at Third Place Books and what does your job entail?
After I finished the Dubliners job, I realised that I couldn't make enough money to live on illustration alone. I'd loved Third Place ever since I'd first come to the States from the UK in 2004. After twice missing the opportunity to apply, I began obsessively checking Craigslist for openings until one finally came up. I'm a general bookseller in charge of the poetry, essays, reference and bargains sections, but I've also become the store's unofficial in-house designer, responsible for the website, posters and displays, bookmarks, shelf talkers and whatever else needs to look like something.

What was your inspiration for the look and colors of the 2017 Seattle Bookstore Day passports?
I did the map in a digital "cut-out" style that I like to use. Initially I tried to avoid going green, because last year's map was green. But this is the Emerald City, so there's no getting away from it. The other colours I tried looked like a band-aid, apparently, so it's hard to deny we're better off. 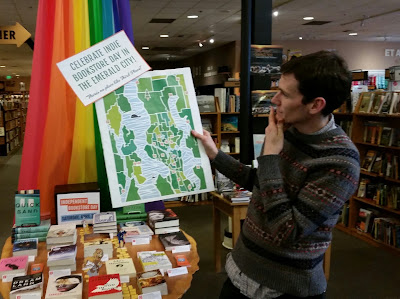 Why do you think Seattle Bookstore Day is important to our community?
There are so many great bookstores in this area, and each plays such an important part in reflecting and maintaining the culture of its community. Customers tell me all the time how much they appreciate our store, and it's wonderful that there's a day to celebrate that appreciation. Especially in These times, an independent bookstore represents so many things that are absolutely vital: a strong local economy, literacy and free expression, and a community gathering together for companionship and the exchange of ideas.

What is your favorite book (or a great book you have read recently)?
I find it impossible to choose one favourite book, but maybe the one that I think about the most lately is How To Be Happy, a beautiful and emotionally raw collection of short comics by Eleanor Davis (published by Fantagraphics!).

Other than Third Place Books, what are some of your favorite local bookstores?
Elliott Bay has a very friendly atmosphere, and my son loves to read in the castle. I read a lot of comics, so if I go to south Seattle and don't pop into Fantagraphics, it feels like a wasted journey. I go to the University Bookstore for my art supplies. And the Neverending Bookshop is a really cute little bookstore in Bothell opened by one of our former Third Place co-workers.

Tell me more about your bookstore insignia project for Seattle Bookstore Day.
I was asked to make some kind of commemorative print for the occasion, in the style of the bookstore-intersection illustrations that Kevin Cannon did for Minnesota bookstores. I'm a big fan of Kevin Cannon, so I was more than usually keen to avoid the possibility of comparison! I hit on the "insignia" idea from looking at old national park patches, and it's been a lot of fun to try to represent each store's individuality in patch form. 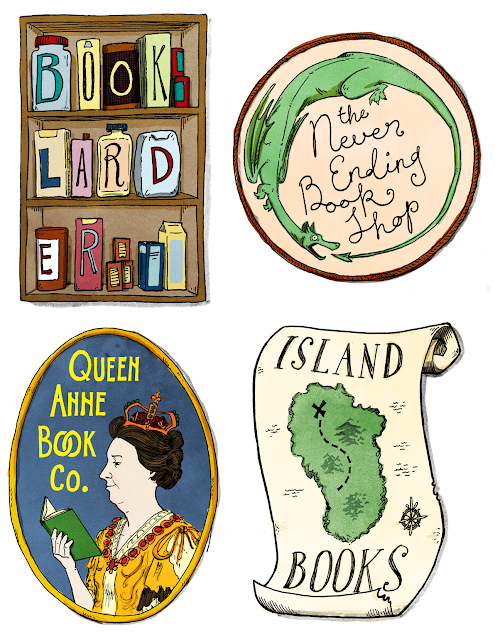 Click here for more on Stephen's designs and illustrations.
at 7:24 PM