Ah, the summer movie! Between June-September we are bombarded with the year's most entertaining and ambitious films. Directors, producers and screenwriters have drawn inspiration and substance from literature from the dawn of the motion picture (eg. Alice in Wonderland circa 1903). Stephanie Meyer's Eclipse aside, this summer's list of movies is no different. Before you watch the movie read these five books:
The City of Your Final Destination - Peter Cameron
An American graduate student travels to a plantation in Uruguay to persuade a dead writer's family to allow him to write the biography and, crossing the line between critical biographer and active character, soon becomes involved himself. The lush Ivory-produced film features veterans Laura Linney, Anthony Hopkins and Charlotte Gainsborough. 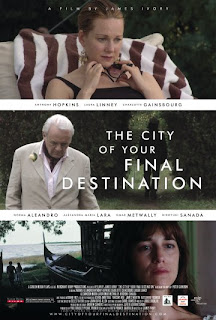 Winter's Bone -  Daniel Woodrell
Adapted in a film that wowed the audiences at Sundance and Berlin (and certain bookstore employees). Deep in the Ozarks, seventeen-year-old Ree Dolly is looking for her father, who has jumped bail on meth charges. Woodrell's redneck lyricism propels a story that is bleak and brutal.

W
Scott Pilgrim - Bryan Lee O'Malley
Michael Cera, indie-nerd darling, will star as the eponymous hero in the film adaptation of Bryan Lee O'Malley's popular comic book series about a Canadian teenager who, among other things, must defeat his new girlfriend's seven exes.

Eat, Pray, Love - Elizabeth Gilbert
Julia Roberts stars in a film adaptation of Elizabeth Gilbert's best-selling memoir of a year's travels to Italy, India and Indonesia. Be entertained and enlightened by Gilbert's prose before being won over by Roberts' customary charisma.

Never Let Me Go - Kazuo Ishiguro
A star of our recent Dystopian Fiction table, Ishiguro's novel about three children in an English country boarding school growing up with only a distant realization of what is in store for them is sure to be a sensational period piece starring Kiera Knightley, Andrew Garfield and Oscar-nominee Carey Mulligan.