Chris - bookseller, used book buyer, and fiction maven - is this week's interviewee for Dead Writers We Like. An aficionado of short fiction, and with a special affection for the vibrant but dusty literature of Latin America, Chris has selected Adolfo Bioy Casares, the Argentinian novelist and short story writer, as an  author well-deserving homage. 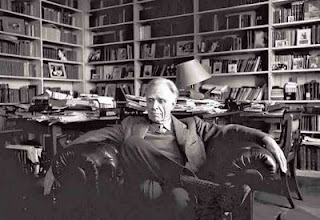 The author
September 15, 1914 – March 8, 1999
Q. How did you first learn about the Casares?
Chris: I was first introduced to Casares by a coworker of mine at Third Place Books. He handed me The Invention of Morel, his best known work, and told me "You'd like this." It was one of many things he handed to me over the months I worked with him, but Casares' work, particularly that novel, has stuck with me the most. So, I guess you could say that my interest in Casares is relatively new, but the type of fiction he wrote, mainly fantastic or speculative fiction, was something I had been interested in for years. Plus, the edition he gave me was an NYRB (New York Review of Books), a series of reissued, long neglected "classics."
Q. What's your favorite work by Casares?
Chris: After reading most of his fiction I still find The Invention of Morel to be his finest work. I should mention that Casares was known for his relationship with Borges, a collaborative literary friendship that remained strong and vibrant for decades. Borges, who I was already familiar with, amazed me with his erudition, his intellectual puzzles and his ability to create a fictional universe so convincing that you had to do your research in order to realize his was making it all up (or most of it). However, his work often left you feeling a little cold, distant, somehow removed from real life. Casares on the other hand was a writer that took the fantastic, the playfulness, the idea-driven fiction of Borges and infused it with human emotion, with everyday situations, with LIFE. Morel is essentially science-fiction (it borrows heavily from H.G. Well's novel The Island of Doctor Moreau) in that it imagines a scenario quite unlikely to exist, yet convincing portrays a man dealing with very real problems. The novel is an exploration of madness and isolation, what it means to love and be loved, and what sacrifices one is willing to make in order to achieve fulfillment. The novel also inspired Alain Resnais's film Last Year at Marienbad which is considered by many (myself included) to be one of the great surreal films of all time.

Casares' other works, which include seven novel and hundreds of stories, are all highly compelling and employ a similar idea-based narrative rich with human complexities. His novel Asleep in the Sun portrays a man whose wife literally turns into a female dog, in Diary of the War of the Pig the senior citizens of Argentina are being systematically killed off by the youth, and in Dream of Heroes the protagonist must recreate the events of one fateful day that have become an obsession. Unfortunately, most of his work is out of print and hard to find. Let us all thank NYRB for reissuing Morel and Asleep in the Sun.

Q. Tell us something quirky about Casares...

Chris: It's hilarious to note that one of Borges and Casares's first collaborations was a pamphlet on the virtues of yogurt. Sound like something Pablo Neruda would have written an ode to (maybe he did?). Oh, and how cool is it that we share birthdays!
Q. And what's your favorite quote?

Chris: "But still I feel (perhaps I only half believe this) that if she looked at me for a moment, spoke to me only once, I would derive from those simple acts the sort of stimulus a man obtains from friends, from relatives, and, most of all, from the woman he loves." - A.B.C. from The Invention of Morel.
at 3:19 PM