Three things that landed this week that everyone should know about. 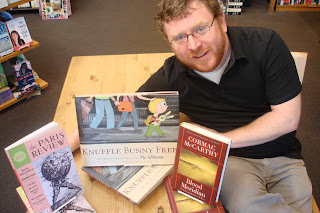 Knuffle Bunny Free – One of the many joys of having young kids is having a chance to read Mo Willems books over and over again. The Knuffle Bunny books are huge in my house and this third and final installment in the trilogy may be the best yet. Its warm, funny and has a really positive message without being preachy. A number of staff members here got a bit misty eyed at the end.

Blood Meridian 25th Anniversary Edition – Hooray for the marketing and design department at the Modern Library for choosing to use the original artwork from the 1985 edition of the classic for this newly released anniversary edition. If you want an original hardcover first edition of this book, you can get one that has been stepped on and has spent time floating in someone’s bathtub for about $700. A clean copy will probably run you about $1,500. So this handsome new edition at $22.95 is a steal. Some argue that this is McCarthy’s best book. That’s kind of  like arguing about whether you like Van Gogh’s Starry Night over his Sunflowers. If you’ve only read McCarthy’s latest works, do yourself a favor and check out this masterpiece.

Paris Review Issue 194 – This is the first issue under the new editorial leadership of Lorin Stein and I find it to be a stand-alone case for not only literary journals but the value of print over electronic media. If I were to have received this issue electronically, I probably would have skipped quickly to the story by Sam Lipsyte (whose novel, The Ask, I loved) and possibly moved onto Lydia Davis’ translations of Flaubert’s stories. I would have stuck to what was familiar and then moved onto the thousand other things that are asking for my attention on my laptop and iphone. But sitting down with the journal without distraction, I found myself reading it cover to cover. I discovered a great new voice in fiction, remembered how much I like and am challenged by the poems of Frederick Seidel, and learned that I could be moved by an essay about, Andrew Lytle, someone I knew nothing about previously. If you haven’t checked it out yet, there’s a great review of this issue by Maud Newton and an offer on that site for a discounted subscription rate. Of course we have it on our shelves as well.
Posted by Robert
at 12:40 PM