Monica has been at Third Place Books just over a year, and her insatiable appetite for books have quickly made her a part of the fabric. Though she continues to read books hot off the presses, Monica has a tender spot for a childhood favorite, the creator of everyone's favorite orphaned red-head. 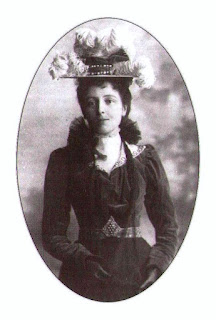 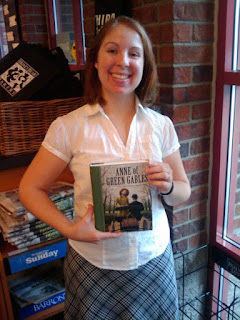 Bookseller sans awesome hat dressed as Anne Shirley for Halloween 2009.
Q. Who was L.M. Montgomery?
Lucy Maud Montgomery was a Canadian author who,  like her most famous character, Anne Shirley, was raised by two strict older guardians in a small town on Prince Edward Island. And like her most autobiographical character, Emily Starr (Emily of New Moon), she lost her mother when she was very young but her father remained in her life until she was seven, at which point he moved to Saskatchewan and she was given over to the aforementioned grandparents. She grew up to work as a teacher and a journalist, always writing fiction in her spare time. After some romantic chaos, including several proposals and one broken engagement, she married a minister named Ewan Macdonald.

As with both of her well-known heroines, Montgomery was a lonely child and relied upon her imagination for her entertainment and happiness. As an adult, she said, "I cannot remember when I was not writing, or when I did not mean to be an author. To write has always been my central purpose toward which every effort and hope and ambition of my life has grouped itself." While her heroines grew up to happy womanhood, Montgomery continued to use her imagination and her writing as an escape throughout her life.

Q. How did you first learn about L.M. Montgomery?
When I was eight, someone gave me a copy of Anne of Green Gables and I devoured the whole series, learning some words that were unusual for a third-grader, like "fortnight." I rediscovered the books in college when I needed some reading for a long train ride: I picked up a box set of the Anne series and read my way through three in a row before falling asleep.

Q. What's your favorite work and why?
I like the Anne series best, although the Emily books are engaging in their own right. At the moment, I'll give the title of "favorite work" to Anne of the Island, which makes for some lovely college nostalgia and romantic drama.

Q. Favorite quote?
I haven't been able to determine if it's authentic or apocryphal, but I do like "I am simply a 'book drunkard.' Books have the same irresistible temptation for me that liquor has for its devotee. I cannot withstand them." Montgomery and I are kindred spirits in that regard.

Q. What's the most outrageous thing about the author?
After all those sweet and wholesome books about Anne and her family, Montgomery wrote a ninth book entitled The Blythes are Quoted. The book reportedly (it's available in Canada, but not yet released in the US) blends poetry attributed to Anne and her son, Walter; stories which take place in the family's hometown; and dialogues between Anne and her husband, Gilbert. In addition to this unusual blend of formats, the book also takes on topics such as adultery, illegitimacy, revenge, murder, and death - a significant departure from Montgomery's typical rose-tinted depictions of the Victorian and Edwardian eras. The book was published in part as The Road to Yesterday and has only recently been published in full.